LAKEHURST – A Lakehurst man that was charged with a robbery after being run over by a vehicle had also been charged in the past for robbing a bank.

Jerome Gilby, 34, of Lakehurst was arrested on May 15. He allegedly robbed a man at gunpoint and was struck by the victim’s vehicle.

When police arrived near the intersection of Cedar Street and Division Street, they found Gilby, who had been injured, and a handgun that was believed to be used in the robbery. He also had suspected heroin and cocaine on him.

He was airlifted to Jersey Shore Medical Center in Neptune. When he was released, he was unable to be located. Two months later, he was recovered with help from the US Marshall’s Service.

He had previously been charged for robbing a TD Bank on Mule Road in Toms River in 2015. An image of him on security cameras was shared online and he was arrested at his girlfriend’s house in Toms River, according to a police press release at the time.

In that robbery, he had handed the bank teller a note demanding cash and fled on foot. No weapon was shown at that time.

Currently, he is being held in Ocean County Jail, facing the following charges: 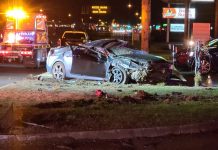