STAFFORD – A Pennsylvania man was cited for careless driving, causing injuries that sent several people including himself to the hospital with non-life-threatening injuries.

On May 27 at 8:24 p.m., Duane Romana, 46, of Harrisburg was driving east on Route 72 approaching Hull Drive when he made a left turn and struck a vehicle traveling on Route 72 west.

Driving the other vehicle was Kyran Hurley, 52, of Cherry Hill. She was driving with five other passengers, ranging in age from 16 to 81.

Both vehicles left the roadway and sustained major damage.

Romana was transported to Atlantic City Trauma Center with a head injury.

The 77-year-old passenger in Hurley’s vehicle was taken to Jersey Shore University Medical Center for internal but non-life-threatening injuries.

Hurley and the four other passengers were transported to Southern Ocean Medical Center for observation and evaluation.

All occupants were wearing seatbelts.

Police redirected traffic for about two hours while the scene was investigated and cleaned. Romana received a summons for careless driving. He has a pending court date in Stafford Township Municipal Court. 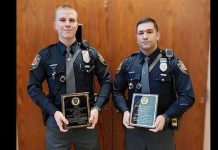