STAFFORD – On Nov. 14, a meeting was held at the Ocean Acres Community Center for search party and volunteers to set up a plan to help find Bu Quach, the 65-year old Manahawkin man who went missing approximately two weeks ago.

Bu Quach has been missing since leaving through a basement door at the Manahawkin Nursing & Rehabilitation Center on Friday, November 2.

Jersey Shore Online previously reported that Quach speaks very little English and left with no money and only the clothes on his back. He also suffers with dementia, diabetes, Parkinson’s disease and Post Traumatic Stress Disorder.

Since the time of his departure, Stafford Township Police, the Ocean County Sheriff’s Department, state police, and various concerned residents have joined forces to search for Quach. A local search party set out last weekend in search of Quach in both the Ocean Acres, organized by Quach’s son Jonathan. 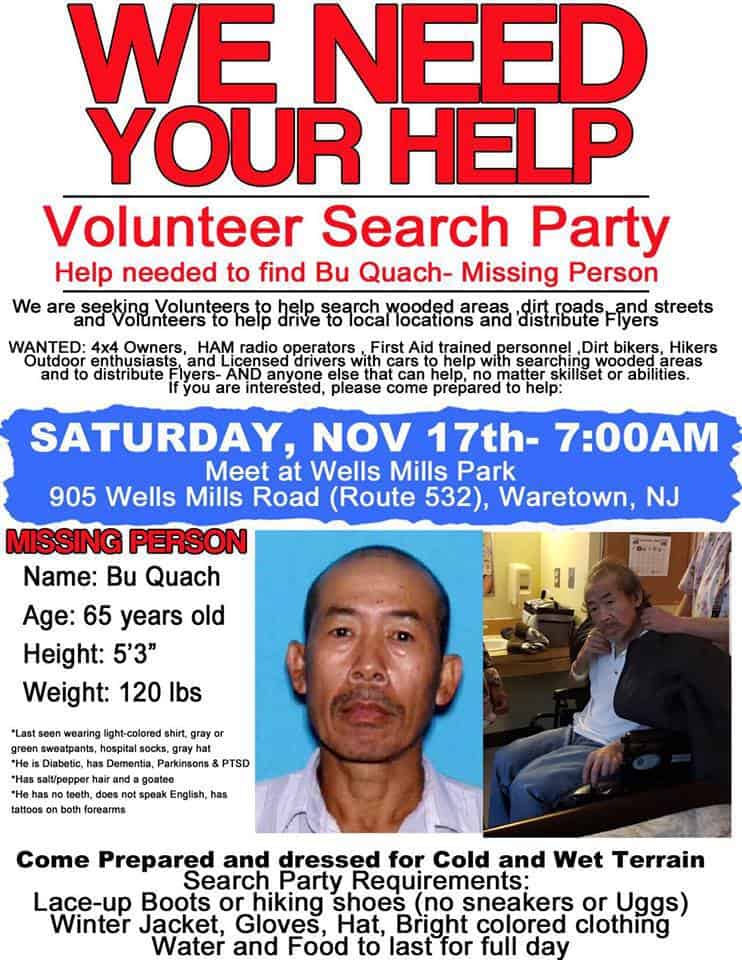 According to Laura Hughes, former Stafford resident and member of the Bu Quach search party, the search party covered some areas of Wells Mills during last weekend’s search and intends to go farther north this Saturday, Nov. 17.

The Nov. 14 meeting provided volunteers an overview of new search areas as well as a “factual timeline” to aid their search since Quach’s disappearance, said Hughes,

Hughes noted that police information was used at the meeting to set the stage for the next search, using this “factual timeline” as evidence to determine where Quach may be headed. This included confirmed sightings and K9 scent trails as markers of his path.

“The only confirmed sighting of Mr. Quach was in Ocean Acres on Lighthouse Drive near Treasure Avenue, which we investigated with great efforts. All other sightings, which have been reported or that were on social media where investigated, but not confirmed,” Vaughn reported.

The search party believes Quach is heading north, along the parkway, said Hughes, although no one knows for sure.

Although Hughes, now a Toms River resident, has no personal connection to Quach, she does have one to missing person’s reports. Hughes has experienced this situation before when her great aunt and uncle went missing. Fortunately they were found, however the experience left a mark on Hughes.

“I just want to pay it forward,” she said.

If you wish to join in the search efforts, visit the group’s Facebook page for more information.

Stafford Police have also requested that residents in the Ocean Acres area check their surveillance footage for sightings of Quach. None have been found yet, according to Vaughn, but police continue to actively investigate the incident.

“We are seeking video evidence from local businesses in Stafford and Barnegat where we believe Mr. Quach may have been near,” he added.

Quach is described as an Asian male, 5’3”, approximately 120 pounds with shaved short hair although it had been grown out a bit, a goatee and was last seen wearing a red t-shirt, dark gray sweatpants and a yellow wristband.

“I am extremely proud of the residents of Ocean County,” said Hughes. “We are Jersey Strong…We are determined to bring Bu home.”