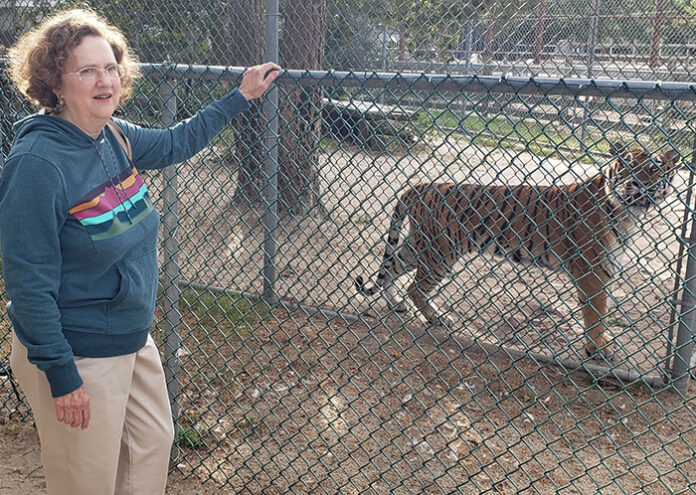 The celebration also honored some of the group’s most memorable residents throughout the years and highlighted current residents who call the Refuge home. This included welcoming the new lions, Aslan and Savannah, and tigers Jules and Jonathan. Attendees enjoyed light fare, cocktails, beer, wine, and live music as they walked through the Refuge and enjoyed the festivities.

Popcorn Park was founded in September 1977 when a raccoon entered into their care after being severely injured by a leghold trap. Due to the severity of his injuries, the racoon, later known as Rigby, was unable to be released into the wild.

Popcorn Park has grown over time and is now home to over 200 rescued animals and its members look forward to continued expansion through a five-year plan to help even more animals in need.

Associated Humane Societies and Popcorn Park Chief Executive Officer Jerry Rosenthal said, “for 45 years Popcorn Park has provided families with an opportunity to see and learn about the animals we have rescued and provide care for.

“There are few places like it on the East Coast. Not only do we save and care for animals that no one else would, but we provide an educational resource to the community to learn about humane education and conservation,” he added.

“Over the next few years, AHS intends to build on the amazing foundation that Popcorn Park has built by enhancing our animal enclosures, expanding the enrichment opportunities we provide our animals and expanding our educational outreach to our local communities,” he said.

An estimated $30,000 education pavilion is set to be built on site toward that objective. A sign placed on the future location of the pavilion states, “through education we can inform, inspire, and cultivate a culture of care that will provoke lasting change for our animals.”

The planned pavilion will be designed to provide hands-on learning for school children and summer camps that will help educate the community about animal welfare issues and the animals living at the Refuge.

Also planned is a lion habitat that will cost an estimated $28,000 that provide Aslan and Savannah a more natural environment to live in. It would include boulders for them to perch and lounge upon, grasses and hearty plants to burrow in and other areas for their stimulation.

Popcorn Park Refuge Executive Director John Bergmann noted that he was “thankful for the opportunity to have taken part in the inception of Popcorn Park and for the journey in building what it is today. I have been very fortunate over the last 45 years to create bonds with our animals and have them accept us into their lives.

“They come out on top when they find their home here. It’s inspiring. I couldn’t have scripted a better life for myself,” Bergemann said.

Among the many animals he has befriended over the decades of service at the facility, the one that stands out the most is Princess the camel. She became his best friend and won the hearts of Refuge staff and visitors.  Princess became famous for her gently demeanor and for picking Super Bowl winners each winter.

She was welcomed into the park in 2004 after the Doris Duke estate in Hillsborough was undergoing renovations and they no longer wanted Duke’s camels on the property.

Princess adapted quickly to life at the Refuge. She lived in the Elephant Pen for a decade before her passing in 2014. She is still well remembered throughout the state.