FORKED RIVER – The oldest nuclear power plant in the United States will close its doors permanently later this year.

Oyster Creek Generating Station, which was slated to close by December 2019, will shut down 14 months ahead of schedule in October, the end of its current operating cycle.

Exelon Generation, the company based in Kennett Square, Pa., that owns Oyster Creek, made the announcement Friday morning. The company said this schedule will allow employees to find other jobs within Exelon. The station employs about 500 people.

“I want to thank the thousands of men and women who helped operate Oyster Creek Generating Station safely for the past half-century, providing generations of New Jersey families and businesses with clean, reliable electricity,” Exelon president Bryan Hanson said in a statement. “We will offer a position elsewhere in Exelon to every employee that wishes to stay with the company, and we thank our neighbors for the privilege of allowing us to serve New Jersey for almost 50 years.”

The station is “a single-reactor plant that produces 625 megawatts of zero-emissions energy: enough carbon-free electricity to power 600,000 homes,” according to company literature. The plant went online in 1969. A plan was reached by state officials and Exelon to close the plant by 2019.

“In advance of the shutdown, Exelon Generation will be working closely with local officials, state agencies, elected representatives and the Nuclear Regulatory Commission to plan for long-term decommissioning. Oyster Creek’s approximately 500 highly trained employees will continue to operate the plant at world-class levels until October 2018. Some will stay on to safely and securely decommission the facility after it is shut down,” company spokeswoman Suzanne D’Ambrosio said in a statement.

The plant’s closing is welcome news to environmental groups across the region.

“It’s important that Oyster Creek is closing early, because it should have closed a long time ago. This is the oldest nuclear plant in the country and it’s falling apart. It leaks radioactive tridium, has problems with storage, and erosion with containment vessels, among other issues. This plant was a disaster waiting to happen so it’s vital for our coast that it’s closing early. This plant is a dinosaur and it’s good that’s its going extinct,” Jeff Tittel, Director of the New Jersey Sierra Club, said.

Look for a more in-depth article on the station’s closing and its impact on the region in the Feb. 10 edition of Micromedia Publications newspapers. 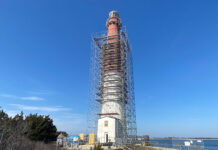