TUCKERTON – A Connecticut man who had shot at a Tuckerton police officer was sentenced to 14 years in New Jersey State Prison, the Ocean County Prosecutor announced.

Miguel Angel-Villegas, 31, of New Haven, Connecticut, will have to serve at least 85 percent of his sentence before he is eligible for parole under the No Early Release Act. He will also have five years of prison for a charge of Hindering, but those five years are being served at the same time.

On November 21, 2019, a Tuckerton Police Officer pulled over a car in which Angel-Villegas was a passenger. The driver, his girlfriend at the time, complied with the officer and pulled over. Angel-Villegas then told her to give the cop a fictitious name and then forced her to speed away, striking another car.

Police said Angel-Villegas came out of the car and fired at the officer. He fled on foot and was arrested later that day just outside of Penn Station, New York City, by the United States Marshals Service and members of the New York City Police Department.

He has been in the Ocean County Jail ever since. 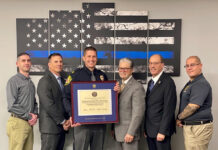