BERKELEY – A Stafford man was arrested for taking photographs inside a Berkeley Township police vehicle as officers were on a first aid call.

Police arrested Jose D. Molina, 32,  for illegally taking pictures inside the squad car, according to the police department’s Facebook page on Aug. 28.

Officers Brian Flanegan and Shane Leighton had responded to an emergency call and were administering first aid to a man at Bill’s BBQ Shack on Atlantic City Boulevard when Molina allegedly entered the police car and took the photos.

Molina was charged with criminal trespassing and unlawful entry and released with summonses, according to police. 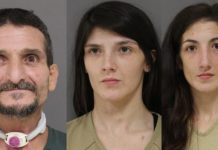