STAFFORD – A collision Thursday morning on Route 72 caused serious injuries and diverted traffic for a half hour according to Township Traffic Safety Officer Justin Pascale who is investigating the incident.

The crash occurred around 8:50 a.m., September 17, at the intersection of Barnacle Drive. A preliminary investigation has revealed that a 2014 Honda CRV operated by Sandra Kearns, 70, of Barnegat was attempting to cross Route 72 from Barnacle Drive into the entrance of the Health Village.

Kearns, apparently, didn’t see a 2004 Toyota Camry when she started to cross which was traveling east on Route 72.

Kathleen Chmielewski, 63, of Whiting was driving the Camry which was impacted by Kearns vehicle causing it to run off the roadway onto the front lawn of Atria Assisted Living.

Chmielewski and her husband Carl sustained serious injuries and were flown to Atlantic City Trauma Center for treatment by Lift Flight where they are currently receiving treatment in the intensive care unit.

Neither driver or passenger were restrained by a seatbelt at the time of the crash according to police. Kearns declined medical treatment at the accident scene. 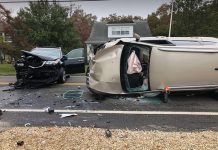 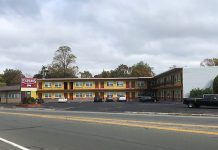