BARNEGAT – Welcome Home. These are the two words that resounded with every person and veteran in the audience, and the words that were emblazoned on the brand new Vietnam Veteran Monument at Gazebo Park.

On March 29, at Gazebo Park in Barnegat at the corner of Route 9 and West Bay Avenue, hundreds of civilians and veterans from all branches of service came together to celebrate the Vietnam Veterans Day as well as the unveiling of the Vietnam Veteran Memorial monument that was constructed in the park.

The ceremony and memorial were produced by Thy and Jimmy Cavagnaro, husband and wife, local residents, and two people who proved that they can make a lot of change for something they care deeply about.

Thy is a Vietnam refugee that arrived in the US with her family in 1975. Her uncle was the captain of the South Vietnamese naval minesweeper that Thy and her family used to escape from Vietnam. Her family sat in the front of the audience during the ceremony.

Thy was attired in traditional garb resembling that of the South Vietnamese flag, yellow with red stripes. In her opening statements, she thanked her family as well as the many volunteers who welcomed her and her family to the states, helping them to stand on their own two feet. She lastly gave emotional thanks to the Vietnam Veterans.

“You helped keep the communists away from our neighborhoods in Vietnam and you made sure we had a safe passage to your own country, after we lost ours,” she said to the crowd, choking up slightly. “Sadly, you weren’t given a hero’s welcome home when you returned home like you should have.”

The afternoon ceremony was filled with joyous and heartfelt “Welcome Home’s” from each one of the guest speakers, emphasizing what couldn’t be said 44 years ago when American soldiers returned home from the vastly unpopular war that defined an era.

Thy began the long and arduous process of putting together this new monument and ceremony about one year ago. While thanking veterans for their service via Facebook, she said that she was “attacked” by a Vietnam veteran online. This person told her that “he was sorry he didn’t kill all of my ancestors.”

Despite this offense, Thy decided to turn the negativity into positivity.

“I made it a point to seek and thank as many Vietnam veterans…so that they might try to heal from any pain this other man was obviously imprisoned by,” she said.

Thy noted that she was very impressed and happy with the sizeable turnout at the event, remarking that she hopes her and her husband’s efforts can create change on a broader scale by inspiring other people and other towns to take initiative in honoring their own local veterans.

Veterans from all groups and all branches of service filled the audience. There weren’t enough seats to fit everyone and many stood along the sides and formed a standing room behind the audience seats. No matter what group or branch these veterans were representing, they all wore their hats and colors proudly.

Ron Brooks, “an east coast legend,” the first double amputee Eagle Scout, and a representative of George H. W. Bush’s “Thousand Points of Light,” among many other accomplishments, was present to sing the National Anthem. Brooks’ powerful rendition of the anthem received an incredible round of applause.

First up was guest speaker, and Barnegat’s own Mayor Frank Caputo. Caputo noted that he was honored to recognize the many veterans that dedicated themselves to their country.

“It’s been over 44 years since our US troops withdrew from Vietnam; due to the unpopularity of that war, veterans returning home were often met with disdain,” said Caputo. “In going forward…lets thank all of our veterans for their service…because they are nothing but the best of the best.”

Both Senator Chris Connors (R-9th) and Congressman Tom MacArthur (R-3rd) were guest speakers during the ceremony as well.

“Today’s ceremony carries a special meaning, in that it conveys the gratitude of Vietnamese refugees who in many respects have a more intimate understanding of the war, and a deeper appreciation for American servicemen,” said Connors during his speech. “It’s appropriate that this monument has been located in Ocean County, which is home to thousands of our Vietnam veterans.”

Connors and Caputo’s comments were echoed by those who spoke after them. The theme of the afternoon was profound thanks, honor, and gratitude from both Vietnamese refugees and American citizens.

MacArthur told a story about his late father, remarking that his father taught him that “a deep commitment draws a deep response from us.” This is what MacArthur recalls as his father’s most profound and enduring lesson, and how he is able to understand and appreciate what the Vietnam veterans have done.

“That debt of gratitude can’t be just a feeling though, it has to be a responsibility that we act on and we will continue to act on it,” he added.

Also present was Susan Haines, National Executive Director of The Exercise Tiger Association, who flew in from Missouri for the event. This association is a Department of Defense Vietnam War Commemoration partner. Haines pinned each of the veterans with a Department of Defense commemoration pin, following the ceremony, at the American Legion. She also handed out special awards to each of the guest speakers in attendance alongside Thy after the monument was unveiled.

Post Commander Gene O’Grady was the first veteran to speak and he ironically left his speech at home. Despite this, he delivered an earnest speech to those Vietnam veterans that helped him along his path to where he is today.

“This is 50 years in the making. It should’ve happened a long time ago,” he said about the ceremony. “I’m grateful for what you’ve [the veterans] done for me, I’m grateful for the sacrifices that you have made for our great country…because of you, Thy and her family were able to come to America and fulfill that American dream.”

O’Grady remarked that through each step of his career, from basic training to active duty to his post at the American Legion, it has always been a Vietnam veteran who has shown him the way of doing things.

Following O’Grady, Barnegat’s VFW Commander Frank Healey gave an emotional speech about the different America that soldiers came home to after the Vietnam War. Wanting to wear his uniform proudly out at night, Healy was told not to. He and his fellow soldiers were told to go out in groups and wear civilian clothes to avoid the disdain of the civilian public.

“We’ll always remember the brave US veterans who fought with my father and my uncle through the war…I thank you very much,” said Dr. Hung Nguyen, the president of the NJ Vietnamese American Community Association.

The keynote speaker of the afternoon was Jonathan T. Gilliam; author, former Navy Seal, former FBI agent, and commentator for various media networks, among many other accomplishments.

Gilliam kept his speech short, delivering a call to arms for the Vietnam veterans of today to help make change once more for an America in need. He addressed the students and youth of today protesting and fighting for change, noting that real change can only be made once one joins the service.

“Less than one percent of people serve in the military; those people should be honored and should never be alone,” he said.

The crowd was ushered over to the small area at the base of the flagpole near Route 9, where the monument was erected.

The monument displays three flags; one for the US, one for South Vietnam, and another for the POW. It reads “Welcome home Vietnam Veterans: In memory and honor of all those who served, died, or remain missing in the Vietnam War.”

Thy and James Cavagnaro paid for the monument as well as put together the entire memorial ceremony. The production drew profuse thanks from the veterans and Thy and James even received a special honorary award for their service from Caputo and Connors.

Thy was labeled as Patriot of the Year during the ceremony, and she showed no shortage of proof in earning that title as she proudly stood in front of the shining, new monument. 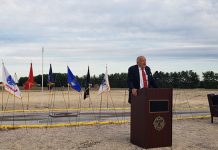 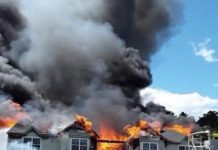