BARNEGAT – At a recent council meeting, a few concerned citizens spoke up about the current state of the Barnegat Police Station, after an ordinance allocating $15 million in bonds in town hall renovations was approved. The station, linked to both the Council Meeting Room and the Municipal Court on West Bay Ave., has been in a deplorable state for some time now, officials have said.

The Barnegat Police force is made up of 46 officers and one civilian employee that can occupy the station’s building at any time, according to soon-to-be Chief, Lt. Keith Germain. Germain noted that for a town with a population as large as Barnegat’s, this many officers is a must. However, for the size of this police force and the significant work they are doing on a daily basis, the current 3,000 square foot police station is in desperate need of expansion and upgrades, both cosmetic and technological.

To begin, the station lacks a basic necessity that many department buildings need: office space. The front room of the building is a converted “office space” that has a glass divider looking into the foyer. Crammed with filing cabinets and paperwork, this office was formerly the town’s dispatch center before they switched over to Ocean County dispatch, due to a lack of space, said Germain. This space has been loosely transformed into an office space by adding a desk for an officer to work at while he is in the station.

Off of this room is an “office” for the station’s accreditation employee, who quite literally works out of a closet. Germain noted that this closet was converted to an office when they realized she needed space but there really wasn’t any.

The station has always been lacking in space so, in 2004, a trailer was added to the left side of the building to expand. The small trailer is now home to five work stations with computers.

“On a busy night you’ll have 12, 13, 14 officers in here trying to write up reports, handle evidence,” said Germain, “So you play musical chairs to see who can get on the computer. That becomes a huge problem for us.”

Not only this, but there is also a metal bench nailed into the floor in this workspace to hold handcuffed prisoners when there isn’t enough space in the cells or to separate male and female prisoners. So, officers can be working next to handcuffed prisoners at any point in time.

Connected to the front office space is a makeshift female locker room. Of those 46 officers in Barnegat, four are female.

“We took what was an office and tried to convert it into some space that they could have,” said Germain.

Referring to the space as a “closet,” Germain pointed out that some of the female officers are mothers who might need the privacy of a space like this to breastfeed. It is required by law that the station has a separate space for female officers and, as Germain noted, this small closet-sized room with just four lockers and a chair is the most that the station could put together with the space provided.

The square footage given to the male officers is not much better. With nearly 12 times the amount of male officers to female officers, the room provides barely enough space. Styrofoam cups and other random articles stack the tops of the lockers for lack of storage space elsewhere.

The men’s locker room houses more lockers than the female locker room, but is also a conduit from the hallway into the holding cell area. This creates an invasion of privacy as prisoners are escorted through here.

On top of the troublesome lack of space for officers to get their work done, there are numerous issues with accessibility, or lack thereof, Germain said.

Germain said that there is no other room that could be transformed into a suitable interview room, “because you have to run the wires [for the cameras] and you have to have adequate space.”

The previous interview room used to be what is now the closet-sized women’s locker room.

“It [an interview] can effectively shut down the building,” said Germain. If you need to get to the other part of the station while an interview is taking place, you must go outside and walk around the building to the back.

The right side of the building is directly connected to the town’s court room. You must get through a secured doorway with a key card to access bathrooms.

“I make the joke that we have no indoor plumbing, because we really have no plumbing inside the building,” said Germain. The bathrooms are technically located inside the court room and not within the bounds of the police station.

Once you pass this secure doorway, you are in a small vestibule that connects the police station to the court room and houses two bathrooms for men and women. Germain said that these are the only bathrooms available for the 47 station employees, any prisoners, any visitors, and anyone who is coming from the court room on the opposite side.

Not only do officers have to share a bathroom with any prisoners that are in being held in the building, but they need to escort them out of the secured part of the police station to do so.

The entire station is equipped with key card access at each entryway to ensure that there are no breaches, but Germain noted that a key card on the outside of the building is not going to stop someone from busting through the balsawood door of the trailer if they wanted to.

“We have to process people in this small space, so when you do have somebody who doesn’t cooperate and it ends up turning into something physical, there’s a high probability of somebody getting hurt,” said Germain. “Anywhere you go you are running into objects.”

The three holding cells in the station are housed in a tiny space and line the left side of the room, while the computer and other processing equipment is stored on a counter lining the right side of the room. The edge of the counter is lined with rubber to avoid injury after an officer was hurt during an altercation with a prisoner, according to Germain.

With very little space to move around, the room is not ideal for transporting and processing prisoners. Not to mention, the cells themselves are extremely small with just enough room for a prisoner to sit or stand.

If you consider the size of Barnegat’s population, you might wonder if three holding cells are enough. Well, it’s not, said Germain. This is partially the reason that there is a metal bench nailed down in the officer’s workspace trailer.

This bench is also meant to abide by New Jersey Sight and Sound laws. These laws stipulate that male and female (or adult and juvenile) prisoners are not allowed to see or hear each other while being held, according to Germain. To avoid complications, the bench was inserted in a completely different room to accommodate for when male and female prisoners are both present, which, Germain noted, happens all the time.

“We get gigged by the state every time they come in,” said Germain. “We have inadequate ventilation, inadequate lighting,” in the holding cell area.

“We would have to spend untold tens of thousands of dollars to redo the HVAC to create enough ventilation in here,” said Germain.

The township was forced to spend $5,000 recently to replace the heating and air conditioning unit in the workspace trailer because the previous one had become moldy and unusable.

Throughout the building, the heat ducts don’t work properly and it can be expected that some rooms will be heated and not others, noted Germain. For instance, the Chief’s office is outfitted with a small radiator because the heat ducts in this office do not work properly, but in the hallway just outside, they work.

In the first trailer, the floors have been patched up with large slabs of plywood nailed down on top of the original floor.

“The floors rotted through back here a couple years ago,” said Germain. “Because it’s expensive…so we screwed some plywood over the floor.”

Along the ceilings inside the original building and the second added trailer (which houses the detectives’ quarters) are water marks and mold spots that show how the building is deteriorating.

The temporary fixes or “Band-aids,” as Germain calls them, do not hold up for very long in the building or the trailers. The floors have been tended to more than once and are visibly wearing away again as officers with 50 pound vests and sturdy boots trek over them in every kind of weather.

Germain also noted that the ceiling tiles, occasionally too wet and heavy, fall from the ceiling.

Asked if anyone has been hurt by these falling tiles, Germain responded, “Not yet.”

Alongside the unfixable violations of the holding cell area, are the inevitable violations caused by circumstance and the resources that the station’s building provides (or doesn’t).

The Barnegat Police Department is a CALEA (Commission on Accreditation of Law Enforcement Agencies) participant and does its best to meet the public safety standards set forth by the Commission, according to Germain.

Every police station should have a Sally Port, said Germain. This is an enclosed garage-like area that a police car can pull into, with a door closing off the room from the outside that leads directly into the station. This port allows for easy transfer and lessens the probability that a prisoner will escape.

The Barnegat station does not have one of these ports, but rather a narrow alleyway near the front entrance that has a short staircase leading into the building.

“We either have to walk them in the front door, where we’re probably walking them past a victim, or we have this [alleyway],” explained Germain.

This is something that the station has to work around due to the nature of the building and a lack of funding. It has worked for them so far, but it requires a lot of extra effort.

The metal bench in the workspace trailer has also proved a security issue as it is located in an open space with a doorway that leads directly outside. Germain said that there has even been one occasion where a prisoner slipped the handcuffs and escaped through the door.

“I cannot make this up,” said Germain.

Germain noted that he is not in favor of moving the police station to the Edwards School, an option previously discussed at council meetings. The Edwards building is too far away from the center of town and is also quite old. It will not serve as an improvement, according to Germain.

For now, the police department is working with the resources that they have and does their very best to work around the hindrances that their work space affords, he said.

It is not yet known how much of the bonds from the ordinance will go towards rebuilding the police station. 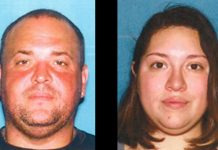