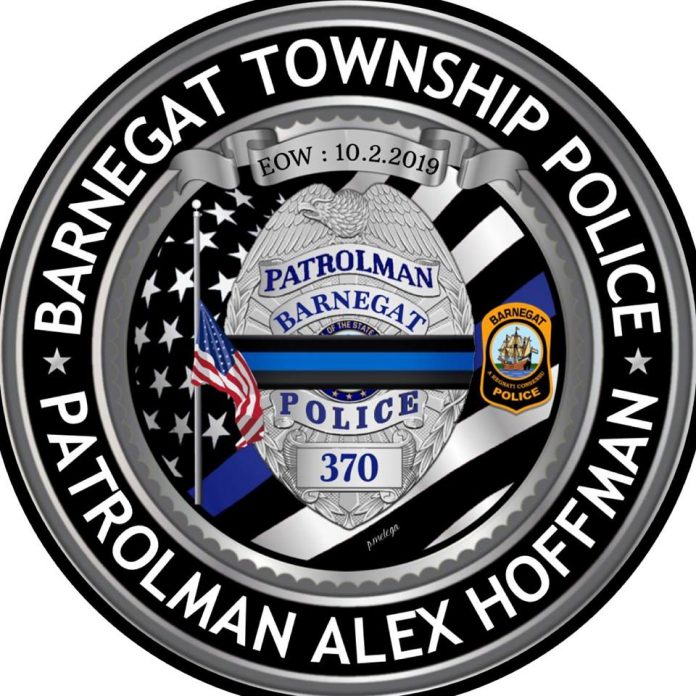 BARNEGAT — Police and residents alike are mourning the loss of one of their own. Barnegat Patrolman Alex Hoffman passed away Wednesday while working off-duty in Lakewood.

Barnegat Police took to social media to announce the passing of their fellow officer: “It is with great sadness that we announce the untimely death of Patrolman Alex Hoffman. Ptl. Hoffman died off-duty, doing what he always did– working hard to provide for his wife and two children.”

Ptl. Hoffman was working a second job on a residential construction site in Lakewood when he suffered an apparent medical episode, according to Lakewood Police.

A member of the Barnegat Township Police Department since 2003, Ptl. Hoffman had a very positive impact on his fellow officers and community.

“Ptl. Hoffman was always here to serve the Barnegat community however he could. During Superstorm Sandy in 2012, Alex donated his personally owned 2.5 ton truck to be used by the agency. That truck was used to conduct high-water rescues at the peak of the storm, saving lives,” stated Barnegat Police.

Not only did he donate his own personal vehicle, but he also dedicated his personal time to obtaining surplus equipment for the agency, “procuring over $500,000 dollars’ worth of high-water rescue and off-road vehicles for our Township, free of charge,” the department added.

Ptl. Hoffman is remembered by the force as well as other local organizations.

Barnegat First Aid Squad wrote: “Our thoughts are with the Hoffman family and all of the Barnegat Police Dept. Alex was an amazing officer to work with, he will be greatly missed. RIP Officer Alex Hoffman.”

“Our thoughts are with Alex’s wife, children, family, and friends as they navigate this incredibly difficult time,” said Barnegat Police.