BARNEGAT – The Township Committee awarded a contract to build a new skate park.

The old skate park was made of wood and had fallen into disrepair. It was torn down. The new one will be concrete and will be built on the site of the old one, near the recreation center on West Bay Avenue, said Jeanne Broadbent, the township’s recreation director.

At the April Township Committee meeting, the bid was awarded to Spohn Ranch, Inc., a California-based company that specializes in building skate parks. The bid was for skate park equipment and installation in the amount of $165,543.50. The township made the bid through the National Joint Powers Alliance National Cooperative System, a community buying program where lots of municipalities go to bid to reduce costs through quantity.

Earlier in the year, officials said the goal was to get the skate park operational in time for summer vacation. 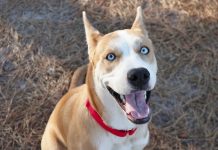 Abandoned Dog Ginger Is Now Up For Adoption