LAKEWOOD – An 8-second video showing an open beer can in a police car has sparked an investigation by the Ocean County Prosecutor’s Office.

The social media post reportedly originated from a SnapChat linked to Meyer’s cell phone, according to a report in the Asbury Park Press. The authenticity of the video is being questioned.

Jersey Shore Online spoke with Ocean County Prosecutor’s Office spokesman Al Della Fave, who said they were aware of the video and would be conducting an internal investigation.

APP.com quoted Meyer as saying he was not aware of the video, didn’t record it, and doesn’t have a SnapChat.

Ocean County Steps Up Services For Seniors During Pandemic 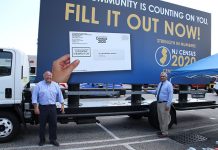