TOMS RIVER – So like about a zillion other people in the world and a good number in Ocean County, I took part in today’s “once in a lifetime experience” of a solar eclipse and found it to be fairly interesting.

Like any pop culture phenomenon I couldn’t wait to don my cardboard officially approved NASA lenses provided free of charge by the Ocean County Library where I picked them up on Aug. 14. It was a good thing I did because they went fast and businesses that sold them ran out pretty quickly as well.

Around 1:30 pm I donned the glasses for the first time, mostly as a joke to say “I can’t see anything…” but a co-worker donned his and looked up and said… “Oh it’s starting” so at second glance I could see the start of today’s fascination…and I have to say, it was pretty cool because I didn’t expect to see it quite as vividly as I did.

Then the disappointment came, the cloud cover emerged and other Toms River denizens of the downtown area walked by with glasses in hand and were unable to see anything. We were all literally chasing the sun for a while and the clouds were not cooperating. “No fair” I said. We squinted, we walked around and we waited. The weather was just not cooperating. Really, Mother Nature, are you going to cheat us out of a “once in a lifetime experience” I thought with some frustration. Twenty-five minutes later, things changed. The sky was brighter and that could only mean…yes…SUN! The sun was out.

Now exiting the building where I work and returning outside I could see others with their glasses on smiling. They were seeing…something.  We gathered around each other, took photos of ourselves looking silly and attempted to aim our phones upward to try and capture…something as we retained our visors for fear of retina damage which would not only be debilitating but darn embarrassing to explain to people were we to suffer from it.

“Oh, I was one of those people who looked up even though I was told a thousand times not to look up without aid of the free magic foil and cardboard glasses,” yeah, no, that was not going to be my experience.

It turned into a bonding moment for people I knew and with total strangers as we all stopped what we were doing to gaze up in the sky with a foreign object on our faces that we would probably never use again unless we kept it for use in 2024, the next time when we’d experience an eclipse like this.

This one however, was supposed to be more spectacular than the one in 2024 and I think that is accurate. I received a phone call from my wife Emily who was a few counties away where it was overcast and she was disappointed. I guess I was luckier. I got to see the moving of the moon blocking the sun and share that moment with at least 20 people. Given the often strange world we live in, it made for a nice diversion and a reminder…that there are bigger forces in the universe then we are and made all our problems on this plain, just a little insignificant…at least for a short time. 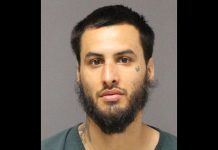