OCEAN COUNTY – One local health clinic is reporting a suspected case of measles, in addition to confirmed cases of pertussis and varicella.

CHEMED, a health services provider with two locations in Lakewood, reported on its website that they are aware of one suspected case of measles in the community.

“There is a very real danger for those who are not immunized such as infants and those who are immuno-compromised who may come in contact with an infected person. A non-immunized pregnant women could result in exposure to the fetus,” the website said.

“CHEMED would like to remind everyone of the vital importance of being up to date with immunizations to protect you and our community.”

As of now, the case is classified as suspected measles, Ocean County Health Department spokesman Brian Rumpf said. Additional testing was performed late Wednesday afternoon and sent to a lab in New York. The health department should have confirmation by end of business day Friday.

Rumpf said the individual with the suspected measles would no longer be contagious. At this point, it appears no one else has been infected.

Rumpf did say the department is investigating the case, piecing together where the man was and has been, in order to alert those he’s been in contact with that they’ve possibly been exposed to measles.

The Lakewood Scoop was the first to report that the suspected measles patient, a man aged 27, had returned from an overseas trip a week ago. The Scoop didn’t report where the man had returned from.

According to the CDC, measles is a highly contagious virus that spreads through coughing and sneezing. Those infected show a fever, runny nose, cough, red eyes and sore throat before breaking into a rash that spreads over the body.

The disease is remains fairly common all over the world, including in parts of Europe, Asia, the Pacific and Africa. The CDC reports there are 19 cases per 1 million people each year; about 89,780 people die from measles annually.

In the United States, the disease is most often brought in by unvaccinated people who traveled overseas, the CDC said.

Measles is preventable through the MMR vaccine.

Rumpf said this case underscores the importance of keeping up to date with vaccinations, especially in children.

More information on vaccinations can be found at https://www.ochd.org/wp-content/uploads/2018/03/Immunization-information.pdf 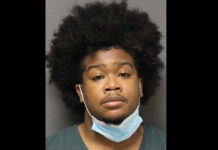