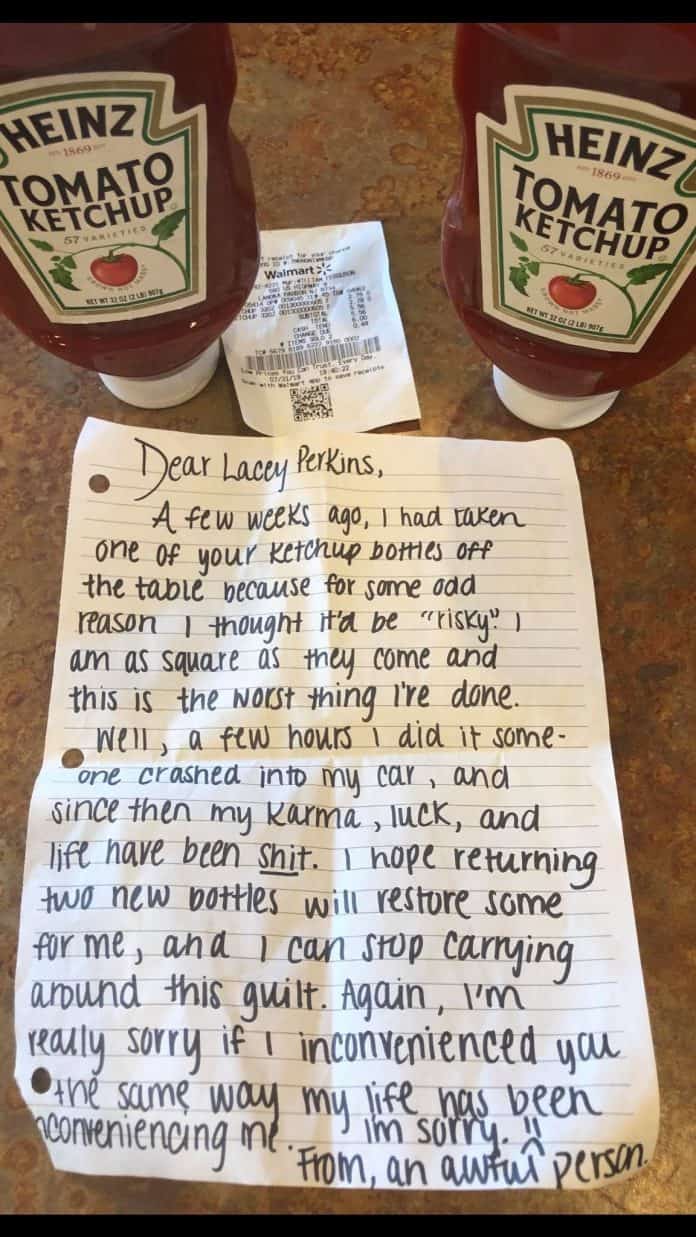 LACEY – After one unlucky individual stole a bottle of ketchup from a local restaurant, things seemed to fall apart. After an apology note from the ketchup thief went viral, the Heinz ketchup company itself offered to help repair some of the damage caused by the so-called karma-induced fallout.

In a recent Tweet, Heinz offered to help fund repairs to the ketchup thief’s car, stating the “Heinz makes you do crazy things.”

Last week, employees at the Perkins restaurant in Lacey Township discovered how a customer’s guilt had caught up to them after they made away with a bottle of the restaurant’s Heinz ketchup.

In an unidentified note left a few days later, the anonymous ketchup thief explained that they felt the ketchup bottle theft had left them with a bad taste of karma.

“A few weeks ago, I had taken one of your ketchup bottles off the table because for some odd reason I thought it’d be ‘risky,'” the note read. “I am as square as they come and this is the worst thing I’ve done.”

“I hope returning two new bottles will restore some (karma) for me, and I can stop carrying around this guilt,” read the note.

In an effort to break the karma cycle, the customer also left two brand new bottles of ketchup.

The owner of the Lacey Perkins, Maria DiLeo, took a photo of the anonymous note and posted it to the local Lacey Township Chatter Facebook page, where it quickly made the rounds on social media.

“This world needs a little good news and I felt bad for her after reading that her car was crashed into and she had other bad luck. If that is the worst thing she ever does, good for her. People take our Splenda packets all the time. I hope her luck has changed and she buys a lottery ticket,” DiLeo said previously.

Well this unlucky customer may not have won the lottery, but she has received a bit of good fortune in the wake of her condiment crime.

“Reformed Ketchup Thief, We get it, Heinz makes you do crazy things. In honor of your good Ketchup Karma, we’d love to help you with your car damages. DM us. We’ll keep your identity top secret,” Heinz tweeted on August 7.

It took but two days for the ketchup company to track down the “reformed ketchup thief.”

On August 9, Heinz tweeted, “Great News! We found the Reformed Ketchup Thief. Thank you to all who helped get the word out.”