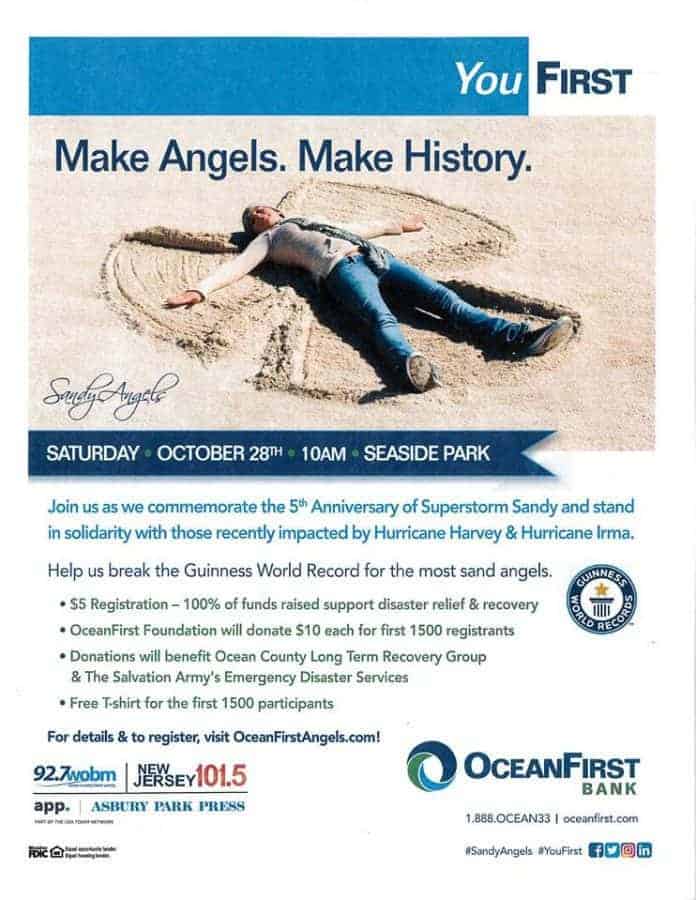 SEASIDE PARK – Here on the East Coast where winters are filled with biting cold and blizzards – or at least they used to be – it’s pretty standard to have a few snow angels under our belts. But sand angels? Maybe not so likely.

OceanFirst Bank is on a mission to change that. The company is teaming up with New Jersey Natural Gas, NJ101.5, WOBM, the Asbury Park Press and the Causeway Family of Dealerships to try and break the Guinness World Record for “Most Sand Angels Made Simultaneously.” The attempt will take place on the beach at Seaside Park, rain or shine, on October 28.

Anyone interested in trying their “wings” out to help break the record can register for $5 online at oceanfirstangels.com. All proceeds will go toward supporting those still struggling to recover from Superstorm Sandy five years later, as well as aiding in disaster relief and recovery efforts for recent victims of this year’s devastating hurricanes.

“As New Jersey’s leading community bank, OceanFirst was proud to play a major role in helping our neighbors and local businesses get back on their feet following Superstorm Sandy in October of 2012,” said Christopher D. Maher, Chairman & CEO of OceanFirst Bank. “Five years later, there are still people and businesses working to fully recover from the devastation caused by Sandy. We thought this would be a fun event and great way to pull the region together to help raise money for those affected by Superstorm Sandy and the recent hurricanes.”

The current record was set just three months ago by the city of Ludington in Western Michigan, where people there were successful in creating 1,387 sand angels at the same time.

Seems like a piece of cake, right? Not so fast. According to the Guinness Book of World Records, there are some pretty strict rules when it comes to creating a Sand Angel, including making your sand mold for at least 30 seconds.

Someone needs to help you get up, too, by pulling on your arms. Make sure you get up without stepping on your creation or leaving any hand prints on it.

Other than that, it’s basically like doing a jumping jack in the sand surrounded by a whole bunch of people for a really good cause.

The foundations involved in the challenge are Ocean County Long Term Recover Group, which aids those impacted by Superstorm Sandy, and the Salvation Army’s Emergency Disaster Services, which supports relief efforts for victims of recent hurricanes.

OceanFirst Foundation and New Jersey Natural Gas will donate an additional $10 for the first 1,500 people to sign up, who will also get a free t-shirt. Anyone who is unable to participate in the record-breaking challenge, but wants to be a volunteer or steward, should visit oceanfirstangels.com or email cferro@oceanfirst.com with “Sandy Angels Helper” in the subject line.