OCEAN GATE – The superintendent of the Ocean Gate School District has been accused of sexually abusing a minor over a four year period, according to a notice of tort claim filed on June 6.

Superintendent Frank B. Vanalesti, 63, of Little Egg Harbor stands accused of using his position to gain the trust of the minor and her mother in order to sexually abuse the minor between 2011 and 2015, according to the notice.

According to the notice, Vanalesti was living with the mother and child at their residence in Ocean Gate at the time, but it wasn’t until after he moved out that the child informed her mother of the sexual abuse.

A report by the Asbury Park Press quotes Board of Education Attorney Christopher Supsie, who denied all accusations against Vanalesti and the district.

Vanalesti has worked for the Ocean Gate district since 2006. Prior to this, he worked as a superintendent in Little Egg Harbor and principal in the Asbury Park School District.

Vanalesti left Little Egg Harbor after two years after six affirmative action complaints were filed against him. The details of the complaints are not known.

Aside from the notice of tort claim, there are no records of criminal charges filed against Vanalesti ranging outside of traffic violations. However, the same APP report details an incident in July 2008 when Vanalesti was called into question for calling a young female student into his office to look at a cut on her chest. 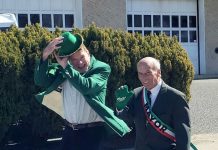