LAKEWOOD – Nick Cannon is known for his big personality. But the rapper, radio host and comedian apparently pushed the envelope a little too far over the weekend during a performance at Georgian Court University, a Catholic college that’s only been fully co-ed for four years.

Cannon was brought in to perform at the Strand Theatre as part of the school’s Homecoming Weekend, so the show was packed with students, staff, alumni and administrators. According to multiple media reports and Twitter feeds, the comedian used excessive profanity, ranting about politics, racism, and even humping a stool.

“I want to acknowledge our profound disappointment with Nick Cannon, the featured artist for this past comedy’s showcase. Mr. Cannon blatantly disregarded the terms of our contract, and much of his act ran counter to what we stand for at GCU,” the letter read.

Although some students posed on social media that they enjoyed the show and Cannon’s dive into real time social issues, the school felt differently.

“While comedy often explores serious social issues in ways that are fun and thought-provoking, Mr. Cannon’s acts crossed the line. His words were offensive and do not represent our Mercy core values. For that, we are deeply sorry, and the university has demanded an official apology from the artist and his representatives.”

Cannon’s response? On Twitter, he posted: “I ain’t apologizing for Shit LOL… wait, I’m sorry your university doesn’t believe in freedom of speech!!!”

An additional statement released by the school said that Cannon had been asked to tone down vulgarity and explicit sexual content during his performance to cater to both older alumni and current students who would be attending the show.

“Unfortunately, he repeatedly chose to ignore this request,” it read. ‘We planned on and trusted we were getting the NBC or MTV version of Mr. Cannon. We did not. That was unfortunate.” 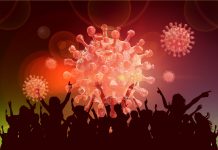