OCEAN COUNTY – Authorities are warning residents to stay off the roads, if possible, due to heavy storm conditions and flooding.

The Toms River Police Department, for example, posted on their Facebook page “Expect severe weather for the next few hours. Stay off the roads and indoors when possible. Do not attempt to drive through flooded streets and always stay clear of downed power lines. Be safe!” 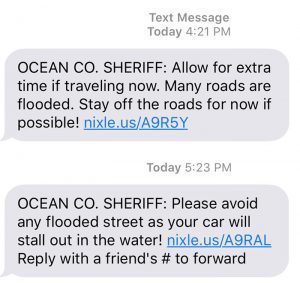 Brick police noted sporadic flooding and power outages. As of 5:15 p.m. Princeton Avenue was closed between Johnson Street and East Drive due to flooding.