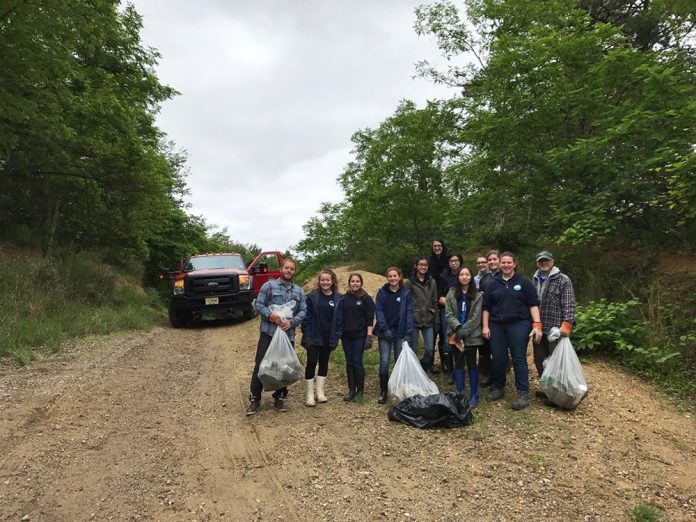 During the Barnegat Bay Blitz clean-ups last week, employees from the New Jersey Department of Environmental Protection partnered with local workers to clean areas of the Barnegat Bay watershed, including wooded areas that drain into the bay.

There were more than 100 clean-up sites in 33 municipalities, said Katie Ribsin, principal environmental specialist for the DEP, and co-chair of the Barnegat Bay Blitz. This goal was to reach the entire 660 square miles of the watershed.

To do this, the DEP partnered with 20 corporations and nonprofits, coordinated with the towns and the New Jersey Clean Communities Council. The “blitz” part is when approximately 5,000 volunteers descended on the area to pick up trash and recyclables.

She estimated that the group will have picked up close to 600 cubic yards of trash from the watershed. Over the course of eight years of blitzes, the total will be about 32,000 volunteers and 5,000 cubic yards.

Often, the groups include school children. “We get to educate them now” in how important the environment is, she said.

In Barnegat, a group met by the municipal dock on East Bay Avenue, an area that manages to have deer crossing signs near the dock.

Lauren Keltos was the captain of the clean-up for the DEP. She said that ordinarily, there would be a group of people on kayaks and canoes out in the water, cleaning areas that are otherwise inaccessible. However, the wind was so strong, and the air so cold, that it wouldn’t be safe to do so.

Instead, she split the 20 workers along two paths. She gave them instructions on how to sort what was being picked up (trash versus recyclables) and what not to pick up (medical waste, wildlife).

Barnegat was just one of many towns participating. Also included were Brick, Manchester, Howell, Jackson, and Berkeley. In Toms River, DEP Commissioner Scott Martin gave a short talk to the crowd before they began their work.

Ocean County Students Get Their Day In Court At Mock Trials