BRICK – Allison Brutka’s singular focus has been her education. Last May, she completed her bachelor’s degree in social work, and this past May, earned her master’s degree. She’s waiting on the state to process her license, but she’s not counting the time. Yes, actually, she is. Three months and counting.

“I am interested in working with veterans with PTSD and other victims of trauma. I’m a very trauma-focused social worker,” Brutka said.

The Brick Township native, 41, has lived in Lanoka Harbor since 2014 with her mother and cat, Agent Phil Coulson. Marvel fans know that the character (not Brutka’s cat) was killed by Loki but was then saved by Nick Fury’s efforts.

But Brutka knew it wasn’t her course load or fascination with trauma that was making her feel…off. Her overall health, aside from life’s usual bumps and scrapes and bruises, has been fine.

She was going to the gym, eating very healthy, but not losing any weight. She faithfully logged her food intake and workouts and measurements.

She had been going to her primary care physician, complaining that the scale wasn’t moving downward, and was instead gaining weight, especially around her abdomen.

That doctor sent Brutka for bloodwork, which always came back within normal ranges.

“You must be eating something you’re not putting down, because it’s not about a woman realizing something is wrong with her body. It’s a fat person trying to hide that they’re eating cake is what I got from him,” Brutka recalled. “You’re just not telling me that you’re eating something bad. And that was not the case.”

This went on for about six months. Her physician finally decided to send her to a gynecologist.

“I’ll never forget the last day I saw him before my diagnosis. He didn’t want to look at any of my logs. He was just like, ‘You’re just a histrionic woman who wants to lose weight faster.’ Just kind of blew me off. He gave me a card to my gynecologist and at the same time gave me a calorie-counter book in large print,” Brutka said. “I don’t know why the large print insults me so much more. But it was just one more straw on the camel’s back, that, ‘I still don’t believe you. Count your calories better.’”

She had better rapport with the gynecologist. “She actually took the time to talk to me, which was refreshing and wonderful.” She sent her for more testing, including an MRI. When Brutka finished at the MRI center, the office staff told her she would hear back from the doctor in about three days.

Brutka got a call from her doctor an hour later. What’s your availability tomorrow?

“She said, ‘I feel terrible, this is the second time I’m seeing you, and I have to tell that you have cancer,’” Brutka said.

She was diagnosed with ovarian stage IIIC, which means the cancer was in one or both ovaries or fallopian tubes, or that it had spread to organs outside the pelvis, but not inside the liver or spleen, according to the American Cancer Society. There are four stages of ovarian cancer, Stage IV and its variations (IVA and IVB) being the final stages. There is no Stage IIID.

Brutka’s cancer was on the left side of her torso and had adhered itself to her abdomen.

“Originally, I knew so little about cancer, I thought that there were five stages, and then when I found out there were four, I thought, whoa, that just got a little more serious,” Brutka said.

Ovarian cancer is known as “the silent killer.” No one in Brutka’s family had it – hence the nickname “Magical Cancer Unicorn” – and although those with family and personal histories of breast, ovarian and colon cancer are at an increased risk, the National Ovarian Cancer Coalition said every woman is at risk. Pap smears don’t detect the cancer. Women who experience increased bloating, pelvic/abdominal pain, trouble eating or feeling full quickly, and feeling the need to urinate more urgently or often should be checked by their OB-GYN.

The Coalition recommends every woman age 18 and older have an annual vaginal exam, women age 35 and older a rectovaginal exam. Those with a higher risk for ovarian cancer should have transvaginal sonograms and CA-125 blood tests, which detect a protein produced by ovarian cancer cells, though those tests can produce false positives.

Women with a family history of breast or ovarian cancers should consider genetic testing for BRCA1 and BRCA2 mutations. Those genes help suppress tumors, but when mutated, lead to an increased chance of cancer development.

Yet, none of this described what Brutka knew of her family health history. Although, after her diagnosis, she did discover she is BRCA1-positive, which means she has a 70 percent chance of developing breast cancer.

“That numb hits you, that shock. But at the same time, such a vindication that I was not crazy. I was not a histrionic woman who just wanted to lose weight faster. Something was wrong. Something was very wrong,” Brutka said.

No, she didn’t call her primary care physician.

The what ifs and hows raced through Brutka’s mind on her way home from the gynecologist. She did have to sit her mother down once she got back home. Her mother instantly started crying and hugging her and telling her it was going to be okay. But it was Brutka who found herself comforting others, that she would be okay. She believed it.

“I worked too hard. I’ve got too much to do to let cancer stop me,” Brutka said. “There are too many people I want to help.”

She graduated with her BSW May 9, 2017, observed “Liquid Diet Day” May 10, and had her surgery May 11. Her gynecological oncologist is Karim ElSahwi, M.D., whose practice is in Neptune. Surgery was performed at Jersey Shore University Medical Center in Neptune; she underwent a full hysterectomy and had several lymph nodes and her appendix removed as well. She endured eight rounds of chemotherapy at Ocean Medical Center in Brick, all part of the Hackensack Meridian Health group.

That’s where Brutka met “the amazing Cheryls,” one of whom is oncology nurse Cheryl Cappetta, BSN, RN, OCN.

“I had [Allison] for her first treatment,” Cappetta said. “I’ve been doing this for a while, so when I meet a person for the first time, I try to assess quickly about their personality. Some people want to know everything, and some people want to know the basics. I remember Allison, immediately bubbly, especially considering the situation. She just seemed very happy. We hit it off right away. That’s helpful, with a caregiver and patient.”

Cappetta has always had an interest in oncology – the study and treatment of tumors – even before she knew the word for her interest. Her father had neck cancer before she was born, and prostate cancer later in life. But she remembers being allowed to watch the 1983 Meryl Streep film “Silkwood,” about Karen Silkwood, a union whistleblower at the Kerr-McGee plutonium plant where workers were exposed to radiation.

“I was a kid and probably shouldn’t have seen the movie, because it left a lasting impression on me, but she’d had extraneous radiation, and she got cancer, and I remember asking, ‘What it is? Why does it hurt?’ I’ve always had an interest in it,” Cappetta said. She worked in several hospitals and oncology practices, and now works in the oncology department at Ocean Medical Center.

“It’s the patients. People think it’s doom and gloom, but the patients are so grateful, so kind. They’re upbeat. They just have a different perspective on life,” Cappetta said.

Not every patient names her port. Brutka’s is Diego.

“I watch my team, and I love oncology, and I think what happens is, their robustness with life teaches us about life,” Laura Zimmerman, MA, OCN, NE-BC, HN-BC, Oncology Site Director, Hackensack Meridian Health Ocean Medical Center, said. She’s Cappetta’s boss. “I’m so grateful for that, even though they’re grateful for us, I’m grateful for them, because it’s just an awakening how we walk in the world and how we should be interacting with other people. They teach us a lot.”

The relationships are real. Brutka and Cappetta are the same age, and when they saw each other that day of this interview, they hugged for a good minute before heading upstairs to be interviewed. They paired off and bantered in a short hand like old school friends do.

“I see my team struggle as people are struggling with the disease, but yet, I see my team holding a space for them. I don’t know how else to say it, but you hold the space for the people that have any kind of cancer,” Zimmerman said. “They do have a connection, and it’s very caring and loving.” 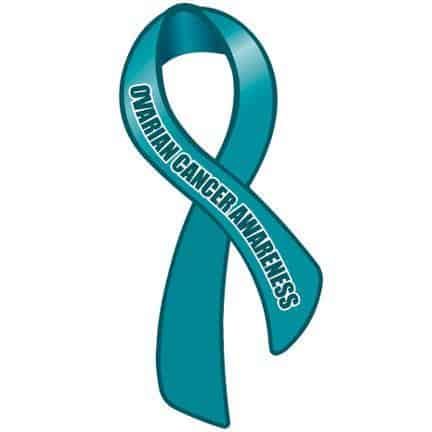 So Brutka continues to follow up with Dr. ElSahwi, get her port flushed. She gets a mammogram every six months, and has already undergone one biopsy.

According the American Cancer Society, in the United States in 2018, about 22,240 women will receive a new diagnosis of ovarian cancer. About 14,070 women will die from it.

The Ovarian Cancer Research Fund Alliance states that women diagnosed at Stage III have to 70 to 90 percent recurrence rate. While it won’t technically be ovarian cancer – as Brutka no longer has ovaries – cells may continue to live in her body.

“I don’t think of my cancer as a battle, like you’re going to fight it, it’s a battle. I don’t think that way, because then if, when I still had the lymph nodes lighting up [note: after her initial surgery, Brutka was found to have lymph nodes with cancer cells, and had to go through two rounds of chemo, from six to eight], and had to have more rounds, that could cause feelings of inadequacy. I didn’t fight hard enough. I wasn’t strong enough. To combat that, I don’t think of it as a fight. I think of it as a journey,” Brutka said. “So, going on with this journey, there are these milestones, and I know six months being cancer free was a big one, because that means that the cancer was affected by the chemotherapy. Because if it comes back, then they have to do something else, and it can get dicey, so it’s good to know that at least if the cancer comes back, we can fight it with the chemotherapy.

“I get yelled at a lot, because I say, ‘When the cancer comes back.’ They’re like, ‘No, if. No, if. You have to think if.’ Well, I’m also a realist,” Brutka continued. “Ovarian does not like to stay in remission. I’m aware of the recurrent rate for IIIC. I’m aware of the five-year survival rate. I’m aware of all that. I feel like it’s my job to know that kind of stuff.”

Brutka said she knows people Google information regarding their illness. She urged them to look up what the words mean, not what it means if you have a certain illness or diagnosis. And stick with reputable sites: American Cancer Society, Mayo Clinic, National Ovarian Cancer Coalition, National Institutes of Health.