TRENTON – The vote on legalizing recreational marijuana is starting on Monday, although details still need to be hashed out.

On Monday, the Senate Budget Committee will vote on the legalization bill, said Richard McGrath, spokesman for state Democrats. If they can come to a consensus, it will be presented to the full Senate. If they pass it, the bill will go to Gov. Phil Murphy’s desk. The same path needs to be taken for an Assembly bill that would accompany it.

Senate President Steve Sweeney (D-3rd) and Murphy had been debating the exact language of the law. Murphy had legalization as a campaign promise. News reports surfaced that they were at odds over the amount of taxes on marijuana and how the sale of it will be overseen.

No matter what form it takes, several local municipalities have already said they don’t want it here. Towns such as Berkeley have passed an ordinance that would prohibit recreational dispensaries from doing business in town. Toms River was going to follow suit, except that the governing body wanted to see what the law would be so that they can effectively address it. 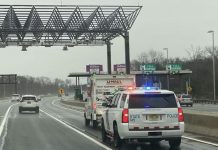