When you do the math, you realize Bill Jankowski couldn’t have seen The Patty Duke Show when it aired in the early ‘60s. He belongs to that micro-generation stuffed between Gen Xers and Millennials that hasn’t been christened with an official moniker. (Someone suggested Xennials.) And like many children of that generation, he fell in love with shows from long ago watching reruns on Nick at Nite, where today, Full House, Friends and Two and Half Men are considered old school.

So as a child in the late ‘80s, Jankowski feasted on old episodes of The Patty Duke Show. He watched other projects of hers, including The Miracle Worker.

Twenty years ago, the 17-year-old Jankowski found Duke’s contact information in a book at Barnes & Noble, and wrote her a letter in which he included his email address.

“So I sent off the letter, and didn’t tell anyone about it,” Jankowski said in a phone call from his Pennsylvania home. “Four or five days later I received an email from her husband [Michael Pearce] saying it was the nicest fan letter she had ever gotten. Here’s our email. Let’s stay in touch.”

And they did, so much so that Duke would refer to Jankowski as her “godson” to friends, and collaborate with him on a book of her decades’ worth of memories in Hollywood. The book, In the Presence of Greatness: My Sixty-Year Journey as an Actress, came out in February.

Duke, called by her first name Anna by those closest to her, including Jankowski, died March 29, 2016 at the age of 69. Media reported the cause as sepsis. She had been sick for a long time.

Their interactions were shaped by the technology available at that time. Before they even met in person, Jankowski got Duke to agree to a three-hour AOL chatroom. She created a “fake” username for the night and fielded questions from the approximately 35 people Jankowski invited to the chat. Duke’s husband acted as transcriptionist.

Jankowski finally got to meet Duke in person in Montreal, where she was shooting her show’s reunion movie, The Patty Duke Show: Still Rockin’ In Brooklyn Heights in 1999. She reprised her dual role as cousins Patty Lane and Cathy Lane, and the original cast joined her.

“Call me stupid or call her a great actress, but I really thought she was two different people,” Jankowski recalled himself thinking as a child watching the original show. He knew Patty was Patty, but thought Cathy was an entirely different actress.

He estimates that over the years, he probably met with Duke at least 30 times in the course of their friendship. At some point, the friendship grew that he would stay with Duke and her family at their Coeur d’Alene, Idaho, home.

“I knew from seeing her on talk shows, I could see her sense of humor through that, she had a very biting sense of humor,” Jankowski recalled. But sometimes with celebrities, what you see isn’t always what you get. “Through the emails…she was very self-deprecating but not insulting to herself. She had a good sense of humor. She acted very maternal, and you could tell that even in the email.

“When I met her, I wasn’t nervous. I was excited about meeting her, but somehow I knew I wouldn’t be disappointed,” Jankowski said.

When he finally met Duke in person, she was dressed in character as Patty Lane. Jankowski was holding Duke’s dog, a little Yorkie, when he was introduced to her by one of the producers of the movie.

So as the years passed and their friendship blossomed, Duke would share stories about her time in Hollywood. It was one Christmas in Idaho, after helping Anna and Mike put up their Christmas tree, that Jankowski got up the nerve to ask Duke something in her kitchen.

“I said, ‘Anna, you’ve been telling me all these stories all these years about all these people you’ve worked with or knew—people like Helen Keller, Sharon Tate, Judy Garland, Lucille Ball, Anne Bancroft—you’ve been telling me these great, wonderful stories. When you go, these stories go with you,” Jankowski said. “People are starting to forget some of these people. We could help keep the memories alive. She really liked that idea.”

And Duke knew that Jankowski was the go-to Patty Duke expert to help with such a project. They strode down Memory Lane together in 2014, when Jankowski spent 10 days in Coeur d’Alene, recording the interviews about a list of people Jankowski came up with. They would follow up with phone calls to chat about more people or fill in information.

The finished product, In the Presence of Greatness: My Sixty-Year Journey as an Actress, goes chronologically from the late ‘50s to 2013, when Duke guest-starred in an episode of Glee.

There are some 80 chapters in the book, all titled after movies or other actors Duke worked with. The person Duke was most nervous to speak about, Jankowski said, was Sharon Tate, Duke’s costar in the 1967 film Valley Of The Dolls. The two became close during filming, and maintained that closeness until Tate’s death Aug. 9, 1969.

Duke said Tate was as beautiful on the inside as she was on the outside.

The two would catch up with each other while Tate’s husband, Roman Polanski, was away on business. Polanski and Tate were actually to have purchased Duke’s Los Angeles home, but that deal fell through. They instead rented 10050 Cielo Drive, where Tate and four others— Wojciech Frykowski, Abigail Folger, Jay Sebring, and Steven Parent—were murdered by the Manson “Family.”

Tate had asked Duke to dinner that night, but she declined. She had strep throat and didn’t want to get her friend or her unborn baby sick. So while they didn’t share dinner that night, they did share something else: maid Winifred Chapman, who had worked for Duke and was working for Tate as well. Chapman is the one who discovered the murder scene.

“You’d have to build a football field with all the people who were supposed to be there that night,” Jankowski said Duke recalled. 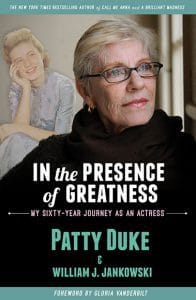 The book was put on the back burner when Duke fell ill and ultimately died. But several months after her passing, Duke’s husband, Michael Pearce, gave Jankowski his blessing to forge on. He had all he needed with the interviews Duke gave; now he just needed told mold it into something readable.

“I think she’d be very proud of [the book]. The chapters I had emailed to her, she was very, very happy with,” Jankowski said. “She felt I had captured her voice very well. And she said, ‘It sounds like me.’”

More information can be found at pattydukebook.com. In the Presence of Greatness: My Sixty-Year Journey as an Actress is available through online booksellers now.