By Kimberly Bosco and Jennifer Peacock

NEPTUNE – Although the murderer’s sentencing was set to take place next week, the Sarah Stern murder trial looks far from over.

Liam McAtasney, 21, of Neptune City, was found guilty on all counts of the death of 19-year-old Sarah Stern back in December 2016. Originally set for 9 a.m. on May 24, McAtasney’s sentencing has been postponed while the judge considers his request for a new trial.

McAtasney was found guilty of strangling Sarah Stern and then disposing of her body off the Route 35 bridge into the Shark River. Authorities said he was assisted by roommate Preston Taylor, who took Stern to their junior prom. The men left Stern’s car atop the bridge to give the appearance the young woman committed suicide. Stern’s body was never recovered.

During the trial earlier this year, 21-year old Taylor testified that he and McAtasney, his onetime roommate, plotted for months to murder Stern, who was their former classmate at Neptune High School. McAtasney believed Stern had $50,000 to $100,000 in cash, but in reality, had about $10,000 in old bills.

Taylor lead authorities to a safe containing the money at Sandy Hook. He pleaded guilty to desecration of human remains, robbery and other charges. Taylor faces only 20 years in prison because of his cooperation with authorities. His sentencing date is pending.

McAtasney’s defense attorney, Carlos Diaz-Cobo of New Brunswick, filed a motion requesting that the presiding judge set aside the jury’s verdict and order a new trial. The motion is scheduled to be heard on May 24.

Diaz-Cobo claims that McAtasney deserves a new trial for numerous reasons, including social media interference in the jury’s decision and the desire to acquit the defendant of robbery and felony charges.

On Friday, May 17, NBC’s Dateline will air an all-new special “The Betrayal of Sarah Stern” at 9 p.m. – 11 p.m. ET/8 p.m. CT. Keith Morrison reports on the investigation and the extraordinary undercover video that helped solve the crimes. A preview can be found at nbcnews.to/2HjvPkr. 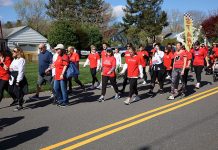