FREEHOLD – A Neptune City man has been sentenced to life without parole in connection with the murder of 19 year old Sarah Stern, who went missing on December 2, 2016, announced Monmouth County Prosecutor Christopher J. Gramiccioni.

On June 21, 2019, Liam McAtasney, 21, of Neptune City was sentenced by the Honorable Richard W. English, J.S.C. to life in a New Jersey State Prison without the possibility for parole, for first degree Murder. Judge English also sentenced the defendant to a concurrent term of 20 years on first degree Robbery, a consecutive term of 10 years on second degree Disturbing or Desecrating Human Remains and a concurrent 5 year term on third degree Hindering for a total sentence of Life without Parole consecutive to 10 years.

The sentence is the culmination of the almost two-month long trial of McAtasney, who was found to have killed and robbed Sarah Stern in her Neptune City residence on the afternoon of December 2, 2016 and then discarded Stern’s body off of the Route 35 bridge between Belmar and Neptune with the assistance of McAtasney’s then-roommate Preston Taylor. Stern’s remains were never found.

Preston Taylor, 19, also of Neptune City, pleaded guilty to charges of first degree Armed Robbery, second degree Conspiracy, second degree Desecration of Human Remains, third degree Hindering Apprehension of Oneself, third degree Hindering Apprehension of Another and fourth degree Tampering with Evidence. He faces a sentence up to 20 years when he returns before Judge English on June 28.

Detectives determined that McAtasney was responsible for killing Stern and stealing property from her on December 2, 2016. The investigation also revealed that Taylor provided assistance to McAtasney in the planning of the robbery and moving and ultimately disposing of Stern’s body in order to avoid detection. Taylor will be sentenced on Friday June 28, 2019, at 9 a.m. by Judge English.

grandmother, the residence was found unlocked but no one was home. Further investigation determined Sarah Stern was the missing driver of the vehicle and her family did not know of her whereabouts.

As a result of Stern’s vehicle being found unoccupied and on the bridge, the Belmar Water Rescue Team was called to search Shark River for any evidence of her body. The Belmar Water Rescue Team was assisted by the United States Coast Guard, the Monmouth County Sheriff’s Office Dive Team, the Area Network of Shore Water Emergency Responders Team and the New Jersey State Police. Divers, boats and helicopters from those units searched the Shark River, but attempts to locate Stern’s body were unsuccessful.

On Sunday, December 4, 2016, detectives from the Monmouth County Prosecutor’s Office joined the investigation in an effort to locate Stern. Detectives from the Prosecutor’s Office and the Belmar and Neptune City Police Departments continued to investigate her whereabouts. The New Jersey State Police Missing Persons Unit and the National Center for Missing and Exploited Children also assisted in this investigation.

During the investigation, a suspected former friend of McAtasney’s came forward to authorities with information as to McAtasney’s involvement in the killing. Detectives from the Monmouth County Prosecutor’s Office surreptitiously video-recorded a subsequent conversation between the two men. In that video, which was played before the jury, McAtasney admitted to the murder and provided graphic details of the slaying.

Prosecutor Gramiccioni thanked and credited all law enforcement agencies for their efforts in this prosecution.

McAtasney is represented by Carlos Diaz-Cobo Esq., of New Brunswick 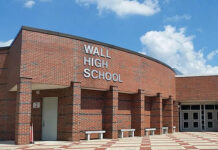