“We are extremely delighted with Captain Wilbert’s accomplishment in this class,” said Gramiccioni. “He not only excelled in the class, but also successfully completed the physical challenges offered by the Academy course. His success comes as no surprise given his dedication and professionalism as a respected investigator and officer in this office.”

Joining Captain Wilbert as a graduate of the 271st Session of the National Academy program was Police Chief Andrew Huisman of the Belmar Police Department.

The two Monmouth County law enforcement officers graduated the 10-week program focused on improving the administration of justice in police departments and agencies at home and abroad and to raise law enforcement standards, knowledge, and cooperation worldwide. The highly acclaimed professional course of study for U.S. and international law enforcement managers offers a curriculum focused on intelligence theory, terrorism and terrorist mindsets, management science, law, behavioral science, law enforcement communication, and forensic science. The men were nominated by their agency heads because of demonstrated leadership qualities. 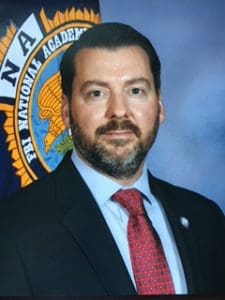 “The professional and personal development gained at the National Academy will definitely enhance Jeff’s law enforcement skills.  The knowledge and both the national and international contacts developed at the National Academy will not only benefit him but also the entire agency. We are proud of Captain Wilbert’s success and determination to build on his professionalism,” said John McCabe, Chief of Detectives at the Monmouth County Prosecutor’s Office.

“Attending the Federal Bureau of Investigation National Academy was an amazing experience, especially being surrounded by so many respected domestic and international law

enforcement executive leaders for 10 weeks,” said Captain Wilbert. “As we in law enforcement work hard to forge relationships with our communities, it is also extremely important that we expand our law enforcement communication and networks.”

Wilbert began his law enforcement career in 1995. He is a graduate of the Monmouth County Police Academy and spent the next 10 years for Manasquan, Colts Neck and Ocean Township police departments. He was hired by the Monmouth County Prosecutor’s Office in 2005, where he has spent the majority of his career in the Major Crimes Bureau where has worked or supervised the investigation violent crimes.

The 223 law enforcement officers who graduated from the National Academy came from 48 states, the District of Columbia, 18 countries, five military organizations, and five federal civilian organizations. The FBI National academy Program at Quantico, Virginia, is recognized around the world for its academic excellence.

The 10-week course offers an advanced communication, leadership, and fitness training. The program is offered to select officers with proven professional records within their agencies. On average, the officers selected to attend the program have 21 years of law enforcement experience and many return to their agencies to serve in executive-level positions.

Training for the program is provided by the FBI Academy instructional staff, Special Agents, and other staff members holding advanced degrees with many recognized internationally in their fields of expertise.

“Although I was the one who attended the National Academy this session, our agency, county and state were all represented in the highest regard,” said Captain Wilbert. “In order for this opportunity to happen, many thanks go to the Monmouth County Prosecutor’s Office Executive Staff for their endorsement and support, to those who covered for me during the academy, and especially to my wife and family.”