NEPTUNE – A Neptune police officer pleaded guilty to a count of fourth-degree Impersonation/Identity Theft, according to a release from the Monmouth County Prosecutor’s Office.

Sgt. Matthew G. Webb, 38, pleaded guilty in court. He had been on the Neptune Township Police Department for 13 years. With is plea agreement, he is no longer able to be a police officer, or seek public employment anywhere in the state.

On Feb. 5, Webb said he used the Criminal Justice Information Service database to contact a woman through Facebook while using a fake name. He was on duty when he did so, and contacting her was for personal reasons, not work.

His sentencing is scheduled on August 16 before Judge Torregrossa-O’Connor. His sentence will be probation but he is allowed to apply for admission to the Pre-Trial Intervention (PTI) program. 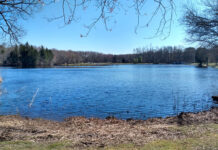