MANCHESTER – A timber rattlesnake was relocated to a safe area after a resident spotted it under her vehicle.

The New Jersey Department of Environmental Protection’s Venomous Snake Response Team was called out to the Manchester residence Aug. 1. The resident saw the rattlesnake going under her car, and kept an eye on it from a safe distance while the team traveled to her home.

The snake made its way around her yard, and nearly under a shed, which would have made retrieving the snake “harder if not impossible…,” Bergmann said.

“We distracted him from going under the shed and caught him up. The Snake Response Team coordinator had already picked out a safe area not far from the capture but away from homes and we relocated him safely,” Bergmann wrote.

The timber rattlesnake is endangered. It’s illegal to kill them.

The rattlesnake can be yellow or black and have a shovel-shaped head. Their color pattern is “dark brown to black crossbands or chevrons, blotches nearest head, full lateral jagged bands by midsection of body. Dark bands typically outlined with lighter colored skin,” according to NJDEP literature.

Anyone who sees a rattlesnake is asked to keep their distance from it, and immediately call the New Jersey Division of Fish and Wildlife, Endangered and Nongame Species Program. 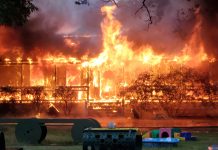 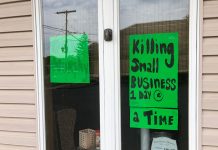 Local Officials Cautious About Virus, But Eager To Reopen