MANCHESTER – The program #NotEvenOnce, where police help high school students understand the dangers of opiates, is growing throughout the state and might go farther than that, Chief Lisa Parker said.

Police have gone beyond just enforcing drug laws and imprisoning dealers, she explained to the public at a recent Board of Education meeting. Education is needed to keep the students from following down that path.

The program is done for the 12th graders here, but it has been written as curriculum that can be scaled to as low as 9th grade, she said. They have trained more than 400 officers throughout the state on how to implement this program in their own towns.

“My goal is to take it out of the state as well,” she said.

The curriculum meets the state standards for education to help pitch it to other classes. The program consists of three, 90-minute health programs, she said. In one session, they watch a jailhouse interview with a Manchester graduate who became an addict. It tells the story of how an 11th grade football injury led to an addiction.

On the third day, they meet a recovery coach, who is also a former addict. At this point, the teacher and police leave the students alone with the coach, Parker said. This is done to allow the students to discuss personal things without an authority figure around.

“There isn’t a class where someone isn’t affected by opiates,” she said.

The police also make sure they approach students in civilian attire, to reduce the amount of “the cops are here” panic.

During her presentation to the Board of Education, Parker noted that it has been about a year since the loss of Adam Lowe, a local man who died of an overdose. His mother, Shelly Lowe, agreed to be interviewed for a video titled “Through the Eyes of a Mother,” that tells the tragic story. The video is shown to students as part of the program. The mother had told Parker that she wished this kind of addiction education had been around when her son needed it. The video can be found at manchesterpolicenj.com/not-even-once.

“The team has put endless hours into it,” she said. “They believe in the program and love the kids.”

She thanked the board and the administration for being a partner in the success of the program. 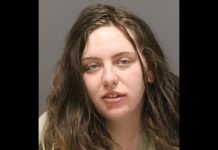 Woman Charged After Banging On Windows With Piece Of Wood