LAKEHURST – A Lakehurst man has been arrested and charged after being struck by a vehicle during a robbery incident back in May.

On May 15, Lakehurst Police responded to the area of Cedar Street and Division Street for a report of motor vehicle crash/disturbance involving a firearm. Once on the scene, officers observed 34-year old Jerome Gilby of Lakehurst, injured after being run over by a vehicle.

Further investigation found that Gilby robbed a male at gunpoint and was struck by the victim’s vehicle. Police recovered a handgun from the scene.

Gilby was airlifted to Jersey Shore Medical Center for treatment where police recovered a large amount of suspected heroin and cocaine from his person. After his release from JSMC, Gilby was unable to be located.

After nearly two months and with the help of the US Marshall’s Service, Gilby was apprehended in Essex County on July 9, 2019. Gilby was taken into custody without incident and is currently lodged in Ocean County Jail.

Gilby has been charged with the following:

Lakehurst Police were assisted by members of the Ocean County  Sheriff’s Department, US Marshall’s Service, MONOC Paramedics, and Lakehurst First Aid Squad during the investigation. 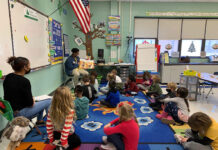