MANCHESTER – After being charged with theft back in September, the owner of a Rumson jewelry store is facing more charges after 11 new victims came forward.

A total of $300,00 has been stolen from the new victims after the jeweler failed to return jewelry.

Anthony Goltsch, of Manchester Township and the owner of the Golden Goose Jewelry Store on West River Road in Rumson, executed his thefts by either not returning jewelry that was brought in for redesign or repair and not paying the victims from their consigned items. Goltsch is also a member of the Manchester Township Board of Education.

The initial investigation revealed that three victims failed to receive any payment from Goltsch. After the first charge, 11 new victims stepped forward with fourteen victims being identified and possibly more victims to come forward.

According to police, these are the statements from the 11 victims:

With a new total of approximately $560,000 of jewelry stolen, Goltsch has been charged with another count of Theft by Failure to Make Required Disposition of Property Received.

If convicted of the Theft charge, Goltsch faces a sentence of five to ten years in a New Jersey state prison on each count.

If anyone has information regarding the Golden Goose, you can contact Detective Michael Acquaviva of the Monmouth County Prosecutor’s Office, Financial Crimes Unit at 732-431-7160, ext 2233, or Rumson Police Detective Donald Schneider at 732-842-0500. 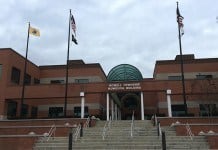