MANCHESTER – Police in Manchester say the located the stolen vehicle they were looking for.

Earlier Wednesday evening, a Nixle Alert went out asking for the public’s help in locating a stolen vehicle.

Police said they were looking for a silver 2008 Mazda 3 four-door sedan with New Jersey plates E45HYM.

They announced on social media shortly before 9 p.m. that they found the car. 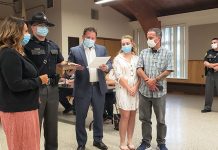