MANCHESTER – Manchester Police are asking the public’s assistance in identifying a hit-and-run driver.

On the morning of Oct. 14, police were called to a Pine Lake Park residence. Police arrived to see the victim’s vehicle pushed out of the driveway. The front lawn was strewn with debris from the suspect’s vehicle.

Police were able to identify the rear passenger-side door as being from a silver Audi A4, from 2004-2008.

Police said the word “CHEATER” was scratched into that suspect’s door. 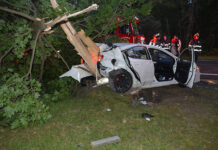