MANCHESTER – Mayor Kenneth Palmer told residents during a recent Township Council meeting that “we won’t know what the new tax rate is until we finalize the budget and we are in the process of doing that even as we speak.”

The mayor said he was reviewing a draft of the 2020-21 municipal spending plan, adding that “once we have the revised budget we will know what the new tax rate will be with the new township wide assessment.”

Palmer said the tax rate will go down “but the assessment will obviously change as well. The budget is forthcoming.”

In other news, Township Clerk Sabina Martin reported that there would be some changes in the township’s meeting schedule in June. “Originally, we had scheduled a June 15 meeting. We rescheduled that meeting to June 8 and June 22.

“Look for the posting on our website and we will give you additional information as it becomes available,” Martin said.

She was also happy to report that the township’s average for responding to the National 2020 Census was above average from the rest of the state.

Martin also noted that due to the shutdown of county facilities because of the COVID-19 pandemic “Our rabies clinic has been cancelled. We are waiving any late fees for the 2020 year. Our dog license renewal portal is up and running. It will be on the township clerk page on the township website.”

She added, “our licensing period starts June 1. Please wait until that time as licenses can not be processed until then. We accept new licenses as of June 1. The county is still not open to do rabies vaccinations. We can still not license the dogs until the rabies are valid. That is state mandated we can’t waive that requirement”

Martin also noted that the township was applying for a Safer grant for the hiring of firefighters and EMTs that in year one and two would pay for 75% and in year three it goes to 35%.

The township is also authorizing the award of a bid for emergency contracting services for emergency excavation in cases where roadways need to be opened and excavated.

Also authorized was a contract with Motorola for the police department as part of the annual maintenance for the police emergency communication system.

The purchase of new cabinets for the EMS building was also approved during the meeting.

Councilman Robert Hudak reported that the Planning Board had held its first virtual format meeting on May 4 where they approved two applications.

The first was an administrative approval for a preliminary site plan application related to comments from the Department of Transportation while another involved a setback application on 5th Avenue. A resolution was passed to authorize an investigation concerning an area of redevelopment of the driving range property on Route 37.

Councilman James Vaccaro repeated a request he has made for nearly a year during the council report portion of the meeting that Council consider discussing and preparing an ordinance banning the growth of marijuana within Manchester Township and also the distribution of recreational marijuana in Manchester Township.

Council President Fusaro noted the governing body’s recent proclamations earlier in the meeting honoring first responders noted that the township’s EMS service “has been in business for just over two months.”

“We’ve gotten some statistics on procedures and how they are going and over the first two months March 1 to the end of April there was a total of 1,680 calls. The amount of the calls that were answered to by Manchester EMS was 93% of the calls,” Fusaro said.

He noted that “it shows you that the numbers our EMS are able to reach, even though it is over 27 a day. When you go on a call and you have to take someone to the hospital which is over an hour or more we are still doing significant numbers.”

Fusaro added that even more significant than the number of calls “is that the time to get to the call has been an average of seven minutes 42 seconds. In the past we had heard of numbers of 20 to 30 minutes and now the average is unbelievably great.”

The council president thanked those responsible for get the emergency service rolling. “It was less than a year when we started to talk about it and we put it into action. We thank everyone especially the EMTs.”

Fusaro also noted that for those looking to register for the township’s summer recreation programs that there is an online registration system. “If you go to the township’s website and click under the departments all the way to right is the recreation department, they will go to how to enter your child or yourself into whatever program we are doing.”

Mayor Palmer said that there have been conversations concerning what kind of recreation programs can be offered during the conditions of the pandemic. “We will see which ones we can hold and which ones we will hold in abeyance.”

Fusaro added, “we are not taking money now because we are still not sure what the summer will bring to us.” 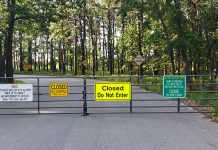