LAKEHURST – Upgrades to facilities around Lake Horicon were one of the topics discussed at a recent Borough Council meeting.

Councilwoman Patricia Hodges reported on the status of an ongoing Public Works Committee project. She reported that she had a meeting with Public Works Department Head Dave Winton who said the department is moving forward with the Community Block Development Grant project involving portable bathrooms at Lake Horicon.

“Hopefully we will have them in place for the summer season,” Hodges said. “There is going to be some work done at the lake to accommodate the portable bathrooms. Some trees need to be removed and some of the electric needs to be upgraded but that needs to be done anyway.”

She added that Winton removed the pilings from the lake because the lake was lowered and will replace them with buoys to mark the swimming area since the buoys are easier to remove. Members of that department completed their safety training for the year.

During the public comment period of that council meeting, resident Bruce Margenson brought up questions about the Lake Horicon project. “Is there any reasons why they wouldn’t be ready for the new season?”

“We were waiting for the grant money first,” Hodges responded adding the next step is ordering them “and unless there is a delay by the manufacturer there is no other obstacle in our way. The specs were drawn up and we expect to move forward.”  The council expects that the bathrooms should be ready for the summer season.

Hodges said that “we have a bid opening coming up for the bathrooms on the lake. We might have been a bit over optimistic on the delivery time for that. It takes about 12 weeks by the time you order it so it might be in June by the time we get it but it will still basically be there for the season.”

Hodges further reported the status of work done at the community center which she said had been painted. Also discussed was removing a bench and replacing a pear tree on Union Avenue. That work might be delayed until after work on a water main project is evaluated.

Hodges noted that “other more suitable trees might be planted” there instead.

Council President Steven Oglesby reported he attended a meeting of the borough’s Office Of Emergency Management in January that was well attended by department heads and first responders’ chiefs and captains.

Oglesby said there was discussion of some updated fire department dispatch protocols and new Police Chief Matt Kline, who was sworn in to his position in February, was designated as the OEM deputy coordinator.

The council president noted that the next OEM meeting was scheduled for April 15, and added a meeting concerning fireworks would be held on April 24. 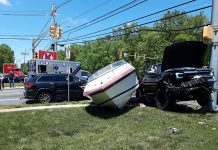