JOINT BASE MCGUIRE-DIX-LAKEHURST – In a comic book, every issue has the hero challenged by an enemy and trying to rise above the challenge. They don’t just stop after one issue.

So it is with Carl Scheckel. The 10-year-old has made it his mission to send his favorite form of literature – comic books – to soldiers overseas. He’s already been successful once, donating 3,000 books. Now, he’s trying to beat that record.

“One of my readers on my website suggested I donate comics to people overseas and to vets in hospitals,” Carl said.

Yes, he has a website. On CarlsComix.com, he talks about his favorite stories, reviews comics, and interviews writers and artists with unprecedented access. A few years ago, he went to comic book camp to make his own comic, called Heammer Head. Part of that project was to create business cards. He put CarlsComix down as a website, to make it look like he had one. His father asked if he’d want to do this for real, and now he does.

And it was through this website, and talking comics with local collectors and dealers, that he was able to accumulate a collection.

Most kids would sit on their collection, bag and board them, and keep them in boxes forever. Instead, Carl collected Marvel and DC books, and some indie books, and brought them to a VA hospital and to the Joint Base McGuire-Dix-Lakehurst.

The initial donation was at the end of February, said Jennifer Myers, who retired from the Air Force and now works with veterans affairs. The initial run of 500 comics were very well received by the hospital, she said. Then, another batch of 3,000 went to deployed personnel.

At the base, they took in the donation and gave Carl and his family a tour.

“Carl is a unique child,” said Master Sgt. Dominick Griego of the military and family support center. His department is in charge of taking in donations and organizing support services for active soldiers.

“His actions are already making a difference,” he said. “It’s a taste of home.”

Griego said he hopes that it goes viral and others get involved. He’s been telling the service members on the receiving end that if they enjoyed the books, to let Carl know.

While it certainly uplifted the spirits of others, it also had a positive effect on Carl.

“It made me feel really helpful. People overseas and veterans didn’t get to read comics like I do,” he said.

Like the Justice League, he’s looking for a group of like-minded people to join in his quest. To donate books, reach out to him at Carl@carlscomix.com. The store East Side Mags, 7 S. Fullerton Ave., Montclair, NJ 07042 has agreed to be a drop-off location as well. 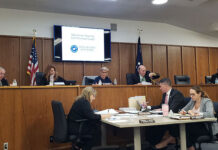