MANCHESTER – Their love story started at a north Jersey church youth group more than 50 years ago. They celebrated their 50th wedding anniversary June 22, with a party with friends and family in their Manchester home the next day. Something they’ve kept from their wedding day will make one final appearance at their party, before getting tossed in the trash: The top tier of their wedding cake.

Marty and Diana Von Boerum don’t remember the flavor. And no, no one will be trying a piece that predates the moon landing.

“I don’t like cake so I didn’t really eat it, so I don’t know what was in it,” Diana said.

But the cake has moved around almost as much as the Van Boerum family (it made a trip in dry ice to Kentucky), and it’s come to symbolize, for Diana, marriage itself.

“Over the years the cake got moldy and pieces of icing had chunked off on the top, and it’s kind of like marriage, you have your bumps but you get over them,” Diana said. “God is the center of our marriage that holds us together.”

“God has always been the center of our marriage, that’s where we are with that, that comes first,” Marty added.

The Knot reports that back in the 19th century, couples would save the top tier of their wedding cakes to serve at the christening of their first child. With couples delaying having children (if they have them at all) by the mid-20th century, the tradition shifted to eating the cake on a couple’s first anniversary.

That’s what Marty and Diana had originally planned, but they didn’t delay having children.

“Our oldest boy was born six days before our first anniversary,” Marty said. “So, [Diana] was in the hospital.”

“We didn’t have our cake. Our son stole the show, which he should,” Diana added.

Their marriage almost didn’t happen. Although they had been attending the same church for years, First Reformed Church of Patterson, they only really noticed each other as older teens. It was Diana who took notice of Marty. They were supposed to go out on a date, but Diana had just moved and gave Marty the wrong number.

When Diana saw him in church the next time, she coolly walked by him. Marty grabbed her arm to explain that he did call, and showed her the phone number she gave him. But he didn’t ask her out again for six months.

They started dating, going steady. But then he got drafted into the Army.

And asked for his ring back.

“I was devastated,” Diana said. “This is the guy I love, and he loves me, and he asks for the ring back.”

But Marty never stepped foot on enemy soil. He went to Fort Dix, then Fort Bragg for military police training, and stayed there for his two-year stint. While he didn’t encounter Viet Cong, he was on riot control, during a time of numerous anti-war demonstrations.

Diana had written a letter to Marty the night he took his ring back, but never sent it. Instead, she penned him weekly letters, talking about the comings and goings of shared friends back in North Haledon. Marty did write to let her know he would be on furlough, but he never called her. He wrote again before his next furlough, but at that point, Diana was dating other men. While on a date up in West Point, Diana learned that Marty did indeed call. In December 1967, they went out again. They were engaged by February, and Marty was out of the military May 22, 1968. They got married in Wayne, New Jersey, a month later.

So they weren’t thinking about cake that first anniversary, with the arrival of their son Scott. (They have another son, Richard.) Marty’s job took across the country and down south. The cake went with them. They decided at their 25th anniversary they’d save the cake for their 50th.

The couple saved part of their 25th anniversary cake too, which joined their original wedding cake in the freezer. The wedding cake stayed together, as long as it was frozen. Thawed, it fell apart. A friend from the Van Boerum’s church here, Whiting Bible Church, used her skill and a concoction of confectionary sugar and shortening, as well as some of the 25th anniversary cake, to resuscitate the wedding cake, a white-frosted, mystery-flavored cake that’s back in the freezer.

They both emphatically said “no” when asked if they’d considered saving the cake for their 75th anniversary.

“It’s over-lived its life in my freezer,” Diana said. 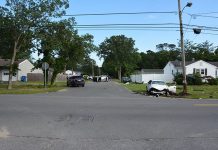