JACKSON – An Ocean County man has been arrested and charged for assault after breaking into a home and stabbing two of the residents.

At 1:34 a.m. on December 4, the Jackson Township Police Department responded to a call on North Hope Chapel Road about a female who signaled a passing motorist and stated how she had been assaulted at her house.

Officers located the female and were able to arrest the male suspect as he was still on the front porch area of the victim’s residence. Police arrested the suspect and recovered a knife from him during a search incident.

After an investigation, it was revealed that for unknown reasons, the male suspect left his home located on North Hope Chapel Road and went to a neighboring residence where he kicked and punched the front door. Since the resident did not answer, the suspect soon left the area.

The suspect then tried entering a second residence and kicked the door until it had opened. Once he entered, he was confronted by the 71-year-old female resident who had been awoken and came out of her bedroom to check on the cause of the noise. According to police, the suspect presented his knife and confronted the female at which she was sitting on the floor. As the victim attempted to get up, the suspect stabbed her once in the upper chest/shoulder area and once in the arm.

Meanwhile, the 69-year-old male resident had exited his bedroom and was also confronted by the suspect and the victim was stabbed twice in his arm. The suspect then walked out to the front porch and was there until officers arrived.

The female victim was able to get to a cell phone and exit the home where she then made her way to the road and was able to flag down a vehicle.

The male suspect, identified as Andre N. Hage, 32 of Jackson, was taken into custody and the knife was recovered during the arrest.

The two victims were brought to a hospital nearby for treatment of non life threatening injuries. Hage was transported to another area hospital for evaluation and treatment. Transport to the Ocean County Jail is pending a determination on his status. 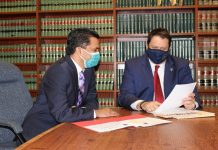