JACKSON – Two individuals from Jackson were arrested on numerous drugs charges after a motor vehicle stop led to the discovery of crystal meth, cocaine, LSD, heroin, cash, drug paraphernalia and more, according to police.

On December 5, 2019, following an ongoing narcotics investigation, Jackson Police conducted a motor vehicle stop in the parking lot of the Shop Rite located on North County Line Road. A search of the 2011 Infiniti SUV and its two occupants yielded THC vape cartridges, crystal methamphetamine, cocaine, LSD, prescription medication and heroin along with hypodermic syringes and other paraphernalia and in excess of $400 cash.

Police arrested 39-year old Michelle Karcher of Jackson. Karcher was charged with hindering apprehension for providing a false name to officers, possession of THC vape cartridges, possession of drug paraphernalia, driving with a suspended driver’s license and possession of a controlled dangerous substance while operating a motor vehicle. There were also multiple outstanding warrants for her arrest.

Both individuals were processed and lodged in the Ocean County Jail. The vehicle was seized pending application for forfeiture. 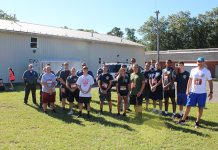