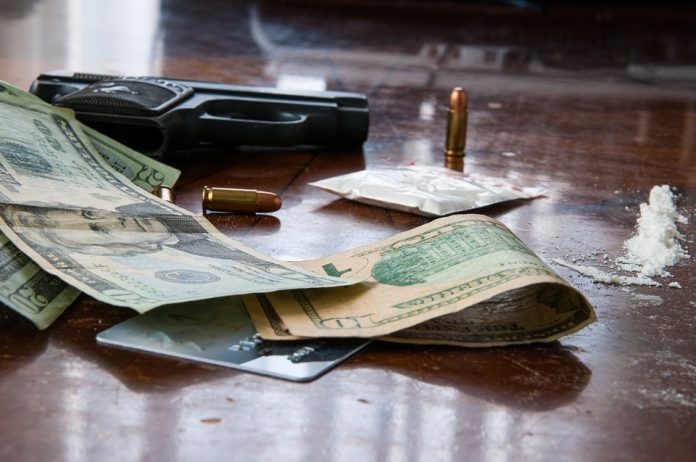 JACKSON – Two kilograms of drugs and 54 guns were seized from three alleged dealers, two of which were employees of a local post office, police said.

William Woolley, 52, of Jackson, and Nicholas Gooskos, 41, of Spring Lake, were arrested and charged with various drug and weapon offenses. The 2 kilograms of fentanyl and heroin that was found had an estimated street value of $3 million.

The arrests came earlier this month, after police were tipped off about possible drug dealing by the two men.

On December 2, detectives watched what appeared to be a drug deal in the driveway of Woolley’s Jackson home. Police arrested the man as he was leaving the area. Andre Sulimenko, 56, of Barnegat, had one kilogram of fentanyl in a bag that detectives saw being handed to him by Woolley.

Later that day, multiple units executed a search warrant on Woolley’s residence. He was found to be in possession of 18 handguns, 28 rifles and shotguns, high-capacity magazines, and various firearm parts. Among the weapons seized were an assault rifle, a submachine gun, and a ghost gun. A ghost gun is a firearm that is assembled from various parts that are not imprinted with a serial number registered with a federally licensed manufacturer, making them difficult for law enforcement to trace.

The next day, police arrested Gooskos during his mail delivery route in Neptune. They recovered 120 individual doses of heroin, and then at his home seized one kilogram of fentanyl, five rifles, one assault rifle, two shotguns, high-capacity magazines, and ammunition.

“Undaunted by the COVID pandemic, the New Jersey State Police are working ceaselessly to protect the public, in this case by seizing large quantities of the super-potent opioid fentanyl and outlawed weapons, including two assault rifles, a machine gun, and an untraceable ghost gun,” said Attorney General Gurbir S. Grewal. “By arresting these men and removing these highly lethal drugs and guns from our communities, we have made residents safer and more secure. The State Police and Division of Criminal Justice will continue to collaborate with law enforcement at all levels to target these dangerous criminal elements.”

“Fentanyl is one of the deadliest opioids in existence, just a few milligrams can kill an adult. This narcotic is not only lethal to users, sellers, law enforcement, and forensic scientists tasked with handling it, trace amounts left on surfaces by traffickers could easily claim the lives innocent victims, including unsuspecting children,” said Colonel Patrick J. Callahan, Superintendent of the New Jersey State Police. “While New Jersey remains on the forefront of the battle against the opioid epidemic, with the State Police Opioid Enforcement Task Force leading the charge with innovative enforcement strategies, we will continue to work with our partners and communities to develop education and awareness campaigns to combat this plague on all fronts.”

“The members of DCJ’s Gangs and Organized Crime Bureau stand ready at all times to work with the New Jersey State Police and our other law enforcement partners in these investigations targeting illegal drugs and weapons,” said Director Veronica Allende of the Division of Criminal Justice. “Those who bring deadly narcotics like fentanyl and banned firearms into our communities will be prosecuted to the full extent of the law.”