JACKSON – For nearly two decades, Jackson residents have come out to support an event coordinated by the township’s Policeman’s Benevolent Association in Pine Park in Lakewood. Gray skies and the possibility of rain didn’t deter more than a thousand people from doing so again.

Police Sgt. Fred Meabe, one of the chief organizers of the event, said that PBA 168’s 19th annual Pig Roast “allows us to give back the support we have received from our community. We are fortunate especially in recent years to have the kind of community support which some communities have not had.”

“We will have more than a thousand people here today even with the threat of rain,” Meabe said.

The event filled the park with various organization booths, inflatable children’s games and other attractions while members of the township Rotary and Kiwanis groups cooked up a variety of food.

The event also allowed for special causes to be highlighted such as the Chloe Strong fund. Richard Leonard was among several members of Fire Company 54, District 4 that manned a table promoting the fund. “Brian Alicia, the father of Chloe, who is 5 years old, worked as a member of the Jackson Mills Fire Department Station 54 for six years. He is now a Harrison fire fighter,” Leonard said.

Chloe had been experiencing acid reflux like symptoms and was being treated for that when on Aug. 5 she was playing the pool with her sister and the next day the right side of her stomach was swollen and she was experiencing pain and discomfort.

She was taken to Jersey Shore University Hospital and her family soon learned the devastating news that she was diagnosed with a Wilms tumor and had to have emergency surgery to remove her kidney which was sent out for a biopsy. The pathology report came back as positive for cancer.

Leonard, who described Chloe’s father as a blood brother and said he was the best man at his wedding, described Chloe as a sweet, funny spitfire and one of the smartest children you could ever meet, but most of all she is full of love and light.

“We are asking for everyone’s help. She is a born fighter. It is in her blood, she comes from a family of fire fighters and EMTs including her father who is a first responder,” Leonard said.

Chloe will be undergoing months of chemotherapy and her parents will be taking time off from work to battle this fight with her.

“We have a GoFundMe campaign. Anything you can give we are beyond thankful to receive,” Leonard said. The GoFundMe page can be found at gofundme.com/n43emg-chloe-strong or reach out via e-mail at jenniferavilla712@yahoo.com. September is child cancer awareness month and supporters of Chloe Strong are hoping to gain as much support as possible.

Meabe said that the PBA provided a donation during the day’s event to help the cause.

Jim Wiater, Millstone, was also promoting a good cause through the sale of his children’s book “The Adventures of Solo: The Big Dog.” Solo was a member of the K9 force of Monmouth County who was killed in the line of duty in 1998.

“The proceeds of the sale of the book are used to purchase body armor and safety equipment for K9 officers,” Wiater said. He said that while the Jackson Police Department does not have a K-9 unit, its PBA has supported the cause by providing books to area schools.

Wiater said that “we continue to do readings for kids at libraries and events throughout New Jersey. Our custom made paracord dog leashes and Solo stuffed animals continue to be a huge success.”

He was presented with the Sheriffs Recognition Award from the Somerset County Sheriff’s Office on June 7. “To date we have sold over 1,200 books and have been able to donate over $15,000 worth of K9 safety equipment. In two years we’ve gotten $50,000 in donations,” Wiater said.

Jackson Rotary member Bill Hybbeneth and fellow volunteer John Mendoza were among many people manning the grills preparing sausages and hundreds of burgers and hot dogs that were served up with salads, beverages and a variety of desserts.

“This is my second time at this event,” Kaitlin Johnson, a Jackson resident, said. “My dad Craig Johnson is a Kiwanis member who is helping out today. I think this is a lot of fun and it really brings the community together as a whole.” 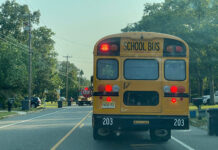