JACKSON – School Board members are investigating the creation of a satellite facility to supplement the growing needs of the district’s transportation department.

Urgency by members of the board was stressed during discussions at a recent meeting about the need of an additional transportation facility. The Jackson School District Transportation Department is located on Don Connor Boulevard, right next to the district Administration Building.

While there is no plan in place yet, the panel decided to move forward to determine what the department’s needs were and what kind of facility would work best.

The board agreed to have District Business Administrator Michelle Richardson begin the process of working with the district’s architect to examine the transportation departments issues in terms of size and scope, and the estimated cost.

Allison Erwin, the coordinator of communications and technology said on Dec. 7 that “it is still in the very early stages of the discovery process, and there will be a great deal of discussion about it before the board can even decide whether they will pursue it further.”

Erwin said Richardson met with the district’s facilities director and with Steven Siegel the district’s architect of record from the Spiezle Architectural Group in early December to evaluate the department’s needs. Siegel is working now on a plan of options and pricing to present to the district.

Board members discussed a possible location during last month’s meeting which included land near Jackson Liberty High School, off North Hope Chapel Road. The district owns that property, according to Erwin.

Board member Michael Walsh recommended the satellite complex project. He described the need for it, saying that the current facility that has been in use for 40 years, has workers operating “in organized chaos.”

Erwin said that the facility houses 119 passenger vehicles, 48 vans and two cars. “Our buses do about 10,500 miles per day and over the course of the year travel more than 1.9 million miles,” Erwin said.

A dozen employees staff the facility. These include mechanics, mechanics helpers and supervisors who work various shifts.

“This would be a second, smaller facility with a transportation yard,” Walsh said, confirming the possibility of it being located on property near Jackson Liberty High School. Walsh called for the feasibility study.

“What Mike is asking for includes an architect plan and cost,” Superintendent Stephen Genco said.

Board member Sharon Dey said “the original yard was first used when Jackson was half its size but now it is more than 20 years later. We toured the facility last year and there is a tremendous concern.”

Board President Scott Sargent said the project needed to be examined quickly. “Government moves at a snail’s pace but I don’t want to see this sit for too long.”

Board Vice President Vicki Grasso called for a timeline to be established on the proposed project.

“If it looks like it might be lengthy we may have to change the timeline,” Sargent said. “It is vital for this district to move forward on this. Our employees go above and beyond for the district. Our business administrator will be working to get a timeline established.”

Walsh also reported on some other buildings and grounds issues including some roofing projects at some of the school’s buildings.

“We have to do these roof repairs. We have put aside $6 million for this,” Walsh said. Walsh noted a roofing survey was in the works regarding estimated costs and a project plan. 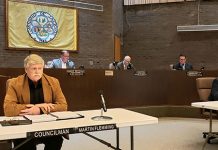