JACKSON – While the 20th anniversary of September 11, 2001 was not forgotten, the annual Amvets Post #2 Pig Roast also proved to be a time of enjoyment and fellowship.

More than 200 people gathered at this year’s event which enjoyed great weather, the music of The Mangos and a variety of food.

The post’s leader, Roy Malott and Women’s Auxiliary leader Deborah Vaughn were both working hard among the 20 members, coordinating the day’s event. Last year’s pig roast was cancelled due to the conditions of the COVID-19 pandemic.

Malott said, “this event has gone on for …?”

“We’re American veterans and we help veterans whether you’ve been in a war or not – this is your home. We help our vets who are in need. Should someone need a wheelchair ramp built we have guys who can do that. We’ve donated clothes, we’ve donated money to help them get through hard times. A number of things to help our veterans get through life,” he added.

“Last year we did 100 Thanksgiving baskets. JCP&L donated stuff and we put it together for 100 families. Every year we sponsor the Regional Day School down here, which is for special needs kids,” Vaughn said.

She added that the post provides Thanksgiving baskets for the school as well.

Vaughn added that the post is also involved in identifying the remains of “different military people in nursing homes so we had to do research on that nationally.”

“There was recently a burial of six that finally got identified and were laid to rest somewhere out in Toms River if I’m not mistaken,” Malott added.

“I think the oldest one was from the Civil War. We had to get the right from Congress to claim them as family members. We’ve been doing that for quite a long time,” Vaughn added.

Vaughn said the Women’s Auxiliary was instrumental with a program on getting service dogs for veterans. “Paws for a Cause we call it.”

“We donate the hall to the Jackson Veterans Memorial Garden dinner dance fundraiser and the handicapped society has a party for the kids. We donate to the Boy Scouts and let them use the hall,” Vaughn said.

Malott added, “we also give to Wounded Warriors, the local branch. We also work with the Jackson ROTC out of Jackson Memorial High School. They do their program every year. We always participate and we give a $500 scholarship out.”

Malott is a 23-year veteran. “I came in at the tail end of Vietnam. I did three years in the Army in the infantry and then I got out and went to the reserves and ended up coming back when I joined the Navy and spent 20 years in the Navy.”

Vaughn noted that among their membership is a World War II veteran who unfortunately, couldn’t make it to the pig roast this year. “He’s a pistol. No walker, no cane. We forgot his last name but everyone knows him as ‘Frankie.’”

“He is our oldest member here,” Malott said.

Vaughn added that Frankie was “97 now and during his 95th birthday we said we have the Boy Scouts here and they never had a WWII vet here could you show up so he said, ‘yeah and I have memorabilia so I’ll bring it.’ But it was actually a surprise birthday party for him and he had all his stuff so we got to see it all. He has a lot of neat stuff.”

Malott said that between the auxiliary and “the veterans we are just under 400. We were up to 676 at one point.”

“Three years ago, we were up to 1,500,” Vaughn added. She couldn’t put a number to how many auxiliary members there are but Malott said the Sons of Amvets division of the post are up to “at least 50.”

A few dozen of them were hustling around the event, helping out in a variety of ways. Among them were Kelly Britton, Lenny Bindos and Mike Canaley who were out by the grill. The home-made salad dishes were prepared by auxiliary members.

“I’m an officer in the post and a vet. Right now, I have the big title,” Canaley said joking that he was among the pig roast cookers. “I’ve been a member for 10 years in Amvets and at this post for three years. This is the best club I’ve ever seen.”

The 9-11 20th anniversary T-shirts were worn by the members working the event. They were also available for sale as a fundraiser to help the post’s mission of aiding veterans.

As to attendance at the event, Mallott said, “I think it’s going to be close to 250 this year.”

To reach out to join or support the post, Malott said, “we have a Facebook page. Amvets.org is our national website.” The post’s phone number is 732-657-0894.

Vaughn said that one upcoming event which has yet to get a name is a pizza fest. “Pizza and music and we hope to raise some money that way.”

“That will be around the middle or end of October. We have another event that is very special coming out on October 2 which is a joint effort with the Fleet Association from Lakehurst. The majority of their people are Navy and one of their members granddaughters has cancer and it will be held here,” Malott said. 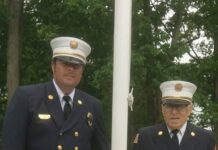