JACKSON – There exists a vernacular, or maybe better described as a shorthand, that only locals can know, and likely only locals who grew up in that place. Locations are known by who lives in that house, or who used to live there, or what building used to be there. In Jackson Mills, so much of the past – both people and buildings – exists only in stories, in memories of those who lived there decades ago.

“All the things we talked about are gone, except the lake,” Applegate said.

Lifelong Jackson resident Borden Applegate knows that vernacular. Going through his mother’s scrapbooks, he added his text and created Jackson Mills: A Personal Reflection, a 77-page hard-cover book filled with black and white and color photos of the people and places of that village. He gave a talk and signed books at the Jackson branch of the Ocean County Library in early March. The meeting room was packed with Jackson Mills residents, or even just men and women who visited the place back in the 1940s and 50s, the period in which Applegate grew up and wrote about in his book.

Jackson Mills, off exit 22 of Route 195, still retains some of its rural quietness.

Any place not easily accessible by bicycle or foot might as well have been the moon. Each village’s children pretty much lived life in their respective villages, save for school—Applegate graduated Lakewood High School in 1960, and went to Switlik when it first opened —and trips out with their mothers and fathers. The Strand in Lakewood was a special trip out for families back then. The village children would congregate around Applegate’s grandmother’s television each Sunday, the only one in Jackson Mills for years.

Jackson Mills was unique amongst the villages. It not only had two general stores, one of which was owned by Applegate’s father, but two swimming holes: Jackson Mills Lake and another “lake,” more like a big pond, behind his father’s store.

His parents worked seven days a week at the store, which left him to fend for himself most of the time.

“We were pretty much, the neighborhood kids and myself, alone all day. We became fairly self-reliant. It gave us an independent streak. We didn’t have to depend on a lot of people,” Applegate said.

Applegate was inspired to create his book when he saw Victoria O’Donnell’s book, Images of America: Jackson Township.

“She encouraged me. I worked with her when she was doing her book. She bought a lot of my photographs. She told me, ‘You ought to write a history of Jackson,’ but I wanted to go in a different direction since she already wrote a history,” Applegate said.

Today offers so many more distractions. Jackson started to suburbanize in the 1960s, bringing with it stores and other conveniences that changed the make-up of the township forever. Those changes of course ushered in a population explosion, if one dares call it that; whereas a few thousand people were spread out around the township, there are now nearly 60,000 people in Jackson.

“Any change that happens, people are suspicious about it, grumble about any kind of a change. Most people don’t like change,” Applegate said. “It wasn’t that bad, because the change was kind of gradual. The developments started up and each year got a little bit bigger.”

Applegate stayed, and joined the Jackson Police Department in 1961, becoming one of Jackson’s first of three full-time police officers. The address of the current police headquarters is 102, in honor of Applegate’s badge number. He retired after almost 40 years of service.

Jackson Mills: A Personal Reflection is available for purchase from Applegate. He can be reached at 732-861-3572. 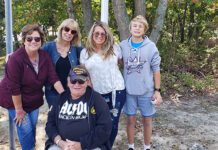 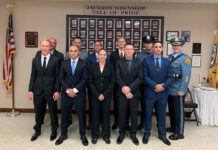