“I guess you could say this is a family affair,” said Mistretta Jr., 29, a former Jackson player and assistant coach. “This is a cool experience. I was in their offices when I was a kid. The goal for me was always to get to this point and to see it come to fruition is a pretty cool experience.” “He turned the Sayreville program around in the early 1990s and also had success at North Brunswick where he turned it around after they had some losing seasons,” Mistretta Jr. said. “He has a pretty good resume and is someone we can lean on. North Brunswick and St. Peter’s are the coaching jobs he would say he is the most proud of if you asked him.”

Mistretta Sr. served as an assistant coach with Sal Mistretta.

“He is a volunteer coach,” Mistretta Jr. said. “He has seen it all. He has been through the battles. He has been around for a long time.”

Despite being the youngest of his family members on the sidelines, Mistretta Jr. made it clear who will lead the Jaguars.

“They understand who the boss is,” he said. “We have real thick skin in my family.”

“The working relationship with my staff and myself is pretty good in general,” Mistretta Jr. said. “There will be a lot of give and take between my coaches and myself. When everyone has a distinct role and a distinct job, I think things work out just fine. This is an interesting situation. I will make my expectations clear and as long as our coaches do their jobs well I won’t need to be a dictator type of coach. If someone is not doing things the way I want them done, I will address it.

“Everyone knows what I want and what I expect. There has not been a lot of relearning anything.”

Mistretta Jr. was approved as coach by a 6-1 vote. The former Rowan University spring ball player will teach physical education at Jackson where he graduated in 2006. He takes over as the mentor for Walt Krystopik, who stepped down in May after six seasons. Krystopik led Jackson to Central Jersey Group IV titles in 2014 and 2015 and the Shore Conference Class A South championship in 2013. Jackson was 44-22 overall during his tenure.

Mistretta Jr. was a wide receiver-defensive back in 2005 when Jackson captured the Central Jersey Group IV title and was 12-0 under then-coach Mike Smith.

“That season was an awesome experience,” he said. “That season further fueled my fire to pursue teaching and coaching. I wanted to try to lead young men into situations like that and teach them what hard work and dedication will do.”

Mistretta Jr. was a defensive coach in 2014 and 2015 at Jackson. He was Sayreville’s defensive backs coach last season when the Bombers won the North II Group IV crown. He will call the Jaguars’ defensive signals.

Jackson has won five sectional titles – all since 2000. Its unbeaten 2000 and 2001 teams were piloted by Reggie Lawrence.

“I have been preaching that we have had a successful tradition,” Mistretta Jr. said. “We have won a lot of sectional titles and that is who we are. We will continue to be one of the toughest and hardest working teams. We will play tough, hard nosed power football on offense and defense. That has been our personality for the past 15-20 years. We want to keep our reputation as a tough, hard nosed team.”

Coming off a 6-5 season, Jackson was led by senior running back Mike Gawlik, a preferred walk-on at Monmouth University, Mistretta Jr. said. Gawlik shredded defenses for a Shore Conference-high 2,129 yards on 271 carries. He rushed for 24 touchdowns and scored 26 touchdowns overall. He finished in three-way ties for second in the conference in overall touchdowns and points (156).

The Jaguars hope for a big season from senior Joe Hurle, who will play offensive and defensive tackle. He’s a 6-foot-1, 250-pounder.

“He’s a big time lineman,” Mistretta Jr. said. “Some lower level (NCAA) Divisin II college teams are asking about him. He plays bigger than he is.”

“We hope they will be big contributors,” Mistretta Jr. said. “Nobody stands out. Losing a guy like Gawlik is tough. Our overall skill is improving. We won’t have one go-to guy who will get 35-40 carries per game. We will have a group of running backs. We will play good defense, rely on some guys on offense and play tough, hard nosed football.”

The young coach has a simple goal for his team for this season.

“We want to make the playoffs, go from there and see what happens,” he said. “Ideally, we want to win that final (Central Jersey Group IV) playoff game at Rutgers (University).

Mistretta Jr. said he feels comfortable in his position.

“It is awesome to not only be a head coach, but to also be a head coach where you had success as a player and coach,” he said. “It is a great experience to be able to have an impact on the lives of young men and be able to teach them the core values that they can use in the professional world. Football is unique as you can instill the fundamentals of life – discipline and dedication. It’s easy to go to the beach and hang with the dudes. It’s not easy to dedicate yourself to a common goal. You have to put the work in now.

“You have to have discipline and pride and the ability to sacrifice and work as a team. Those values carry over to anything you do. Talent will only get you so far. Hard work and dedication will push you over the edge.”

Jackson Township School District athletic director Rob Paneque said there were about 15-18 candidates for the position of head coach.

“Vinny played and coached here and is a young professional and enthusiastic kid who is very professional in his demeanor,” Paneque said. “He has had success as a defensive coordinator. We are excited to have him. He fit several aspects for us, especially from the teaching standpoint.”

“When the job opened up, I could not turn it down and I went after it,” Mistretta Jr. said. “I hope we can continue the tradition that Jackson is known for.” 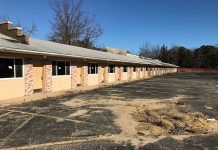