JACKSON – Council President Alex Sauickie refuted accusations of anti-Semitism alleged in a May 20 lawsuit filed by the New Jersey Dept. of Justice and explained why an ordinance scheduled for final reading would now be tabled.

The DOJ have accused township officials of violating the Religious Land Use and Institutionalized Persons Act (RLUIPA) and the Fair Housing Act (FHA) by targeting the Orthodox Jewish community through zoning ordinances restricting religious schools and barring religious boarding schools.

The suit alleges that the township used zoning laws to target Orthodox Jewish individuals for intentional discrimination; and to “exclude them from a community is illegal and utterly incompatible with this nation’s values,” Eric Dreiband, Assistant Attorney General for the Civil Rights Division said.

The agency threatened to “use the full force of its authority to stop such anti-Semitic conduct and prevent its recurrence,” Dreiband said.

Craig Carpenito, U.S. Attorney for the District of New Jersey said, “no religious community should ever face unlawful barriers or be singled out for inferior treatment. This complaint reflects our continued commitment to combat discrimination and unequal treatment.” Dreiband and Carpenito’s comments were in a DOJ press release.

During the May 26 council meeting, Sauickie said the comments of Dreiband and Carpenito were filled with inaccuracies.

“Township Attorney (Gregory) McGuckin mentioned on the record at our last council meeting that in the history of Jackson Township there has never been an application for dormitories therefore there has been no approvals or denials by any party negatively impacted by ordinances placed in Jackson Township.”

Sauickie added, “anyone who wished to apply for dormitories in Jackson Township has had the ability to do so and bring it up before the land use board for review. They have that ability now and they had it in 2018, 2016, and all the years before that.”

“The ordinance that was enacted in 2017 was simply redundant legislation and the town is on record as taking steps to clean up that redundancy which was done before – not as a result of the past week’s DOJ’s press release and subsequent complaint,” Sauickie said.

He noted that the complaint negatively branded Jackson “without ever giving Jackson Township an opportunity to represent itself. The heart of the complaint, land use laws protect against overdevelopment, protect the environment and guide how a municipality should develop in the future.”

Sauickie said, “Jackson far exceeds its peers especially in a state that fails so miserably. Whether you measure a municipality fiscally, by its schools, by its crime rate, its parks, its attention to its environment or even its traffic, Jackson consistently outperforms in every category.” He also noted the township’s high bond rating (AA+) in comparison to the state’s low bond rating (triple D rating). “It is the second worst rating making New Jersey the second worst in the country.”

He added that while the state has lost $3 billion and business that left New Jersey, Jackson has attracted new businesses and potential corporate ratables “which represent as much as 20% being contributed toward the municipal budget.”

Sauickie said that an FBI survey concerning hate crimes in the state’s 172 municipalities with a scale of one as having the most and 172 the least number of hate crimes ranked Jackson as 165. Jackson had one example of a hate crime.

“Jackson is approaching 60,000 residents and we had one hate crime reported and our police solved that crime and brought those offenders to justice,” Sauickie said.

Sauickie also noted that the DOJ litigation also “accuses Jackson of religious discrimination and violation of religious land use laws. To set the record straight, Jackson has dozens of religious groups practicing within its borders with thousands of families of each of those religions including an estimated 10% of the population being Orthodox Jewish families already living in Jackson.”

He noted that in the last decade there has been only one application for a religious institution and that it was approved. “The one religious school application that was denied for improper land use upheld in New Jersey Superior Court,” Sauickie said.

Jackson passed a resolution permitting Eruv devices on utility poles. Eruv are used within the Orthodox Jewish community to extend the boundaries of their households and allow them to carry objects on the sabbath day by Jewish law. “That is in practice today,” Sauickie added noting that members of the Orthodox Jewish community were added to the list of chaplains in the township.

During the township’s prior meeting, two ordinances were introduced that would repeal two 2017 ordinances. Both were deemed redundant by the governing body. Ordinance 6-20 moved forward to rescind the dormitory ruling as it is redundant.

“This governing body was prepared to rescind a 2017 school ordinance (involving where schools could be built in the township) “given the numerous factual inaccuracies in the DOJ press release and complaint we now feel there is to uncertainty in the DOJ’s understanding of what is going on in Jackson. Therefore, we are going to table Ordinance 5-20 until the June 23 meeting,” Sauickie added.

He stressed “we aren’t tabling it indefinitely and we may revisit it on that date but between now and then we’ve asked our attorneys to meet with the DOJ to help clear up the factual errors. We hope the DOJ will meet with our attorneys with an open mind and when they realize the inaccuracies in the documents will quickly and publicly correct them.”

Saucikie said that while the governing body has inherited some of the current issues involving lawsuits that “we will not let Jackson Township – which is a town inviting to all and has been attacked in the last several years by outside entities and has never been given a chance to tell its side of the story – to be branded so negatively and with a broad brush.”

He noted that if things did not go amicably between the township’s attorneys and the DOJ that “Jackson will have its day in court to fight these allegations.”

Ordinance 6-20 was approved to be repealed and the status of Ordinance 5-20 is expected to be discussed and possibly voted on during the June 23 meeting. 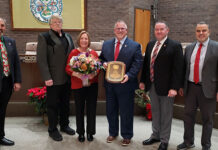