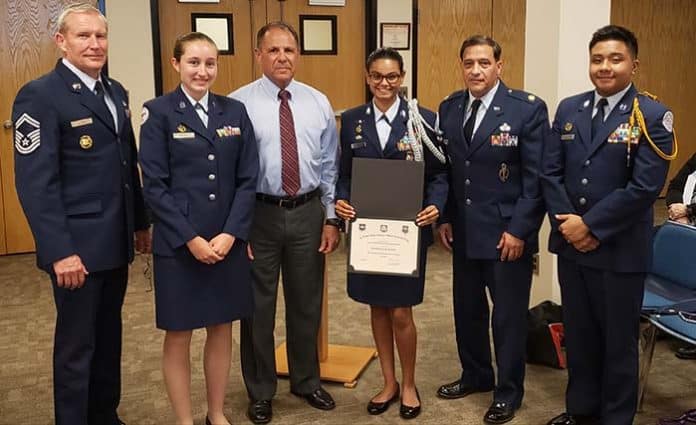 JACKSON – It was a night for reflection on the closing school year, celebration for two student programs, and farewells for retiring staff during the most recent Board of Education meeting.

Board President John Burnetsky joined his fellow board members in honoring staff from the McAuliffe Middle School, which he said, “harnessed the power of school spirit and community support to earn a $25,000 grant.”

The school was recently named the recipient of a $25,000 grant from Project Fit, which was sponsored by ShopRite and Dannon yogurt. Funds from the grant will be used to promote the school’s physical education program with outdoor and indoor equipment, a new physical education curriculum and teacher training.

“Accomplishing this was no small task. It took a sustained effort of people throughout Jackson voting every day – actually 500 times a day for a month, for a combined total of 15,866 votes,” Burnetsky said.

Burnetsky added that “this pushed McAuliffe up to one of the top spots out of 70 schools and clinched the grant money. This is yet another example of how our staff, parents and community members go above and beyond to provide our students with the things they need to have a well-rounded educational experience.”

The board president noted the work of McAuliffe Principal Debra Phillips who was part of the team responsible for winning the grant. Phillips could not be present during the May 21 Board meeting where the presentation was made.

Burnetsky recognized assistant principal John Lamela and teacher Victoria Hay who were present at the meeting as well as teacher Nick Caruso who was not able to be present. “They were instrumental in this endeavor,” Burnetsky said.

Also recognized during the evening were members of the district’s ROTC program which received the ROTC Distinguished Unit Award.

Board member Thomas Colucci made the presentation to Air Force Major Michael Macagnone and Senior Master Sgt. Charles Latimer for earning the Distinguished Unit Award. “It is my pleasure to be able to recognize and congratulate this group of cadets and their instructors. Together, you have once again set the bar high and then soared over it.

“We are so happy tonight to be able to celebrate all of the ways our 200 cadets and their teachers have worked to improve themselves and their community,” Colucci said.

Colucci noted that in addition to all the cadets accomplished during the school year, “they have again earned the Air Force ROTC’s Distinguished Unit Award which recognizes the personal growth and accomplishments of the cadets, the contributions of the instructors as mentors of the cadets, and the support of the school community.”

“This award goes only to select units out of the 900 units nationwide that have performed above and beyond expectations,” Colucci said.

“They have completed more than 2,600 hours of community service to this community. They have raised more than $18,000 for their own drill equipment, supplies, scholarships, trips, awards and experiences. They give back to others and most importantly, they set the best possible examples for their peers and classmates,” Colucci said.

Cadet Hannah Mahabir, a graduate of Jackson Memorial High School said she was 50th in her class and will be attending New York University in the fall. During the meeting she spoke about the ROTC program.

She said the goals of the program was to build character, to be involved in community service and to raise funds to cover the cost of unit activities.

“We took part in various parades, raised money for Toys For Tots and the Commission for the Disabled. We raised $18,570 for our unit,” Mahabir said.

“We hold a one mile run that we tested on twice a year. “We are academically well roundedalong with our fitness and discipline, Mahabir said.

The unit has taken place in trips to McGuire Air Force Base and the USS Intrepid Museum.

Colucci added that his daughter was involved in the ROTC program and he also congratulated the staff of the McAuliffe School. “Receiving that grant is awesome.”

An ROTC trip to Washington was discussed during a prior meeting where Board member Gus Acevedo said he wished to accompany the students on the trip at his own expense to observe the activity.

Superintendent Stephen Genco noted that the Jackson Liberty Jazz Band “had won every award in the state. Every week I was reading about some event that they had won.”

Genco also thanked the 1400 staff who make up the district and congratulated all the retirees who will be leaving the district.