JACKSON –Several moms lined up recently in front of the Township Municipal complex with cell phones in hand awaiting the police escort that would lead the bus that ferried their daughters for a special honor.

Police cars and the bus sped by leaving little chance for an enroute photograph but there would be other opportunities. The athletes and their coach arrived in the parking lot and disembarked to have a group photo that would proceed a later photograph sessions with members of the governing body.

They were the first order of business on the night’s agenda. Their coach, Tara Rachele, told The Jackson Times that the girls placed extremely well at the New Jersey Cheerleading & Dance Coaches Association (NJCDCA) competition held at Brookdale Community College earlier in the year and “they were the only Ocean County team that placed first which is great in the all-music division.”

The NJCDCA Inc. is a non-profit organization founded in 1991 to foster safety, sportsmanship, education and provide support to all who are involved in cheerleading and dance in the State of New Jersey, according to its website.

The organization is led by an executive board/committee that is available to provide assistance and to present information to meet diverse coaching needs. Through their volunteer efforts and the revenue of the annual NJCDCA State Cheer/Dance Competition, the agency is able to recognize and commend the outstanding accomplishments of student athletes throughout the state.

“There were 14 girls that competed (as part of the JTLHS Cheer Team) made up of freshmen to seniors. They did a completive routine. High impact, tumbling, dancing, and cheering and they had over nine teams in their category,” Rachele added.

“It was a really neat honor. They hadn’t placed first since 2014. Our practice routine is all music, non-stop for two minutes and 30 seconds. We practice three to four times per week, two hours per practice because their routine is high impact.”

She noted in a prior interview with The Jackson Times, “if we are off a few days it’s like starting from scratch building up their endurance. Many of our practices are off site as we compete on a spring floor so the parents pay for gym rentals.”

Rachele noted that “in between the completive team, we are balancing spirit cheer for football and basketball seasons.”

The Brookdale Community College event drew more than 125 cheer and dance teams who competed in various divisions over a two-day period. Rachele became the head varsity coat at JTLHS in 2007.

Mayor Michal Reina presented each team member with a proclamation honoring them for their win in the state championship.

Council members congratulated the JTLHS on their honor and the hard work that went into their competition win. 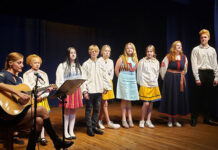