JACKSON – The new year began with a familiar face absent from the dais as the township’s clerk, Janice Kisty, retired at the end of the year.

She served as clerk for three years but prior to that she was the deputy clerk and also performed other township roles.

During the last meeting of 2021, Kisty received a number of accolades from the council. She was also presented flowers and a plaque of thanks for her work and dedication over the years of her service.

“Thank you, madam clerk – I have said that phrase dozens of times and I have only said it to one person, Janice Kisty,” Council President Andrew Kern said. “I am very proud to have had the honor to be the very first council member that Janice swore in and it is an honor that will stick with me for a very long time.”

Kern said that since that evening, “our clerk has cared for us, shared amazing times with us and has helped us during our extraordinary tough times with warmth, grace and a wonderful sense of humor. We were all new to the council and she helped us with her guidance. Thank you.”

“My successes were not alone and they were because of the staff I had in the last three years and even before. Everyone joins in. That is the kind of township Jackson is. I call Jackson my home. I live in Manchester now but Jackson is still my home. When I come into this building it feels like home,” Kisty remarked.

She added, “thanks to everyone, the council, the mayor, the administrator, the department heads and staff, you are the best. Thank you all.”

Councilman Nino Borrelli said “she didn’t pull any punches. She told it like it was. She loved this township very much and she will be missed.

A short time later in the session, Kisty administered the oath of office to Diane C. Festino who took her place as clerk as of January 1. Also sworn in was Mary Moss as the new deputy clerk.

“Good luck in your new roles and I look forward to working with you,” Borrelli said.

Councilman Steven Chisholm told Kisty “it was great working with you in the rather short time I had. You have been a credit to this council and Jackson Township residents as well. I worked with her a lot with the Chamber of Commerce. She will certainly be missed.”

Councilman Alex Sauickie congratulated Kern for his work as council president in 2021 and noted Kern’s drafting of an ordinance about signage which was a quality of life concern in the community. He also called Kisty the best clerk in the state. “I thank you for all your hard work. We had some fun times and we had some hard times. It makes me happy to see someone happy when they are retiring. You have many years to enjoy it and I wish you the best. Dianne, congratulations on your appointment.”

Councilman Martin Flemming added, “you took very good care of us and I have every hope that your replacements will do so as well. You left us with a very good team.”

The governing body discussed three ordinances one of which involved the acquisition of property from the State Department of Transportation. Another ordinance established the salary range for various officials and employees of the township for 2022 and thereafter. The third ordinance amended existing chapter code concerning the mixed-use neighborhood center highway commercial zone

Council officials also commended the work done to host the township Menorah and Christmas tree lightings which were both outside events this year due to the ongoing pandemic. “It was good to see everyone out celebrating the season,” Councilman Chisholm said. 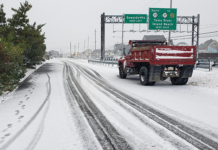